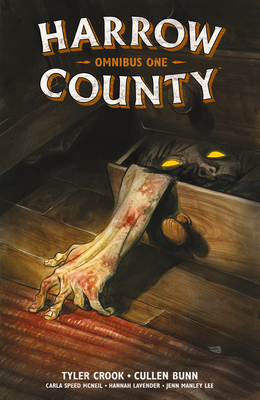 The first half of the highly acclaimed, Eisner-nominated horror fantasy tale, collected in a value-priced omnibus.

Emmy always knew that the woods surrounding her home crawled with ghosts and monsters. But on the eve of her eighteenth birthday, she learns that she is connected to these creatures--and to the land itself--in a way she never imagined.

Cullen Bunn is an American writer of comic books, short stories, and novels, known for his work on comic books such as Deadpool for Marvel Comics, The Damned and The Sixth Gun for Oni Press, and Harrow County for Dark Horse. His novels include the middle reader horror series Crooked Hills, and his short story work includes the anthology collection Creeping Stones & Other Stories. In 2011 Bunn was nominated for a Ghastly Award and won Broken Frontier's Best Writer Independent Award. In 2012 he was nominated for a Bram Stoker Award and an Eisner Award.