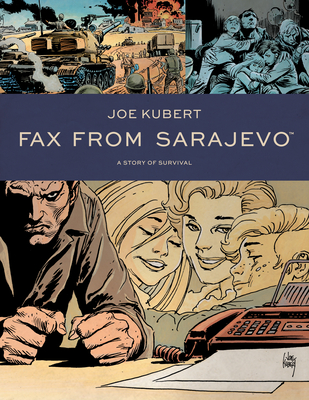 A brand-new edition of the greatest work from comics master Joe Kubert!

The astonishing true story of a family in Sarajevo, Bosnia, trapped in a city under siege as war and genocide rage around them, with only a fax machine to communicate. On the receiving end of these faxes from his trapped friend, Kubert brilliantly illustrates their struggle toward freedom against the worst kind of odds. It's the tale of a very real war, told from the perspective of innocent victims, but it's also full of strength, survival, and love.

Joe Kubert was a prominent cartoonist, graphic novelist, and illustrator. He was the founder and president of the Kubert School for cartoon and graphic arts in New Jersey. His extraordinary career spans the history of the comic book in America: he began drawing comics in 1938, just as Superman made his debut in Action Comics #1, and continued to be one of the most vital cartoonists in the history of the industry, writing and drawing both mainstream comic book characters as well as, more recently, graphic novels of his own conception. Kubert began his career at the early age of 12; his long list of well-loved cartoon figures includes Abraham Stone, Tarzan, Flash, Batman, Superman, and the X-Men.