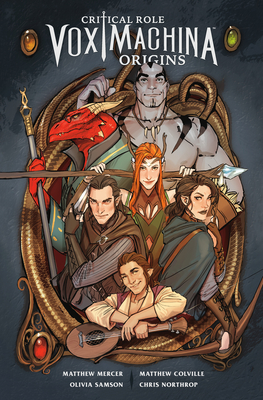 
Usually Ships in 1-5 Days
From the creators of the hit show "Critical Role" comes Vox Machina's origin story! Writers Matthew Mercer and Matthew Colville team with artist extraordinaire Olivia Samson and colorist Chris Northrop to bring you the story of where the heroes' journey began.

The band of adventurers known as Vox Machina will save the world. Eventually. But even they have to start somewhere.

Six would-be heroes on seemingly different jobs find their paths intertwined as they investigate shady business in the swamp town of Stilben. They'll need to put their heads-- and weapons--together to figure out what's going on...and keep from being killed in the process. Even then, whether or not they can overcome what truly lurks at the bottom of the town's travails remains to be seen!