Reclaiming the Republic: How Christians and Other Conservatives Can Win Back America (Hardcover) 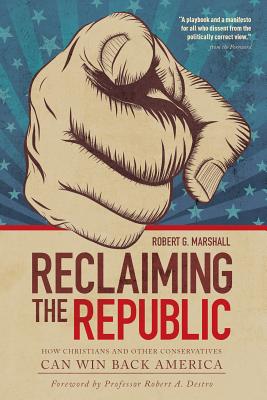 Reclaiming the Republic: How Christians and Other Conservatives Can Win Back America (Hardcover)


Email or call for price
Radical secularists have undermined the premise of the Founders to the detriment of our nation and its people. It's time to fight back. Reclaiming the Republic will show you how.

While the election of Donald Trump as president may have slowed down the project of those who would continue to move America away from the laws of Nature and of Nature's God, the struggle is not over, and the next few elections may well prove decisive. This book shows Christians and all people of good will and traditional values how to use the levers of civil power to defeat anti-Christian and anti-Natural Law policies at all levels of government...and, what is more important, defeat the proponents of such policies before they gain access to those levers. Reclaiming the Republic pulls back the curtain on the structure of government so that motivated Christians can expose and defeat the work of secularists.

Perhaps no person in the country is better qualified to write this book than Robert G. "Delegate Bob" Marshall. Having forgotten more than most Americans ever learned about our system of government, the thought of the Founders, state and local politics, and those aforementioned "laws of Nature and of Nature's God" as expressed politically, accompany Marshall as he takes readers on a crash course in Civics 101.

Marshall is also uniquely qualified to write this book as he knows first-hand that the radical Left is pulling out all the stops to consolidate their gains and reverse their losses. After serving his neighbors for thirteen terms in the Virginia House of Delegates, he was defeated in 2017 by the first openly transgendered candidate to be seated in a US statehouse. His opponent received much outside help, both in terms of volunteers and out-of-state money. Why would a race for the Virginia House of Delegates attract such attention across the country? Again, the radical secularist Left knows what is at stake. Do you? Read this book, digest its lessons, share with your children and friends, and get involved.
Robert G. (Bob) Marshall has a long and distinguished record of service to his constituents in Virginia and beyond. First elected to the Virginia House of Delegates in 1991, he has been a consistent and courageous voice for traditional values and constitutional government. He has appeared on numerous national radio and television programs commenting on public policies. He was previously the coauthor with Charles Donovan of Blessed are the Barren, a Social History of Planned Parenthood. Bob and his wife Cathy have five children and attend All Saints Catholic Church in Manassas, VA.