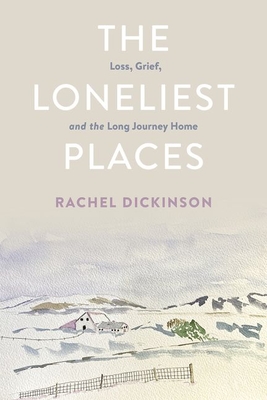 A child's suicide pitches you into a hellish place of fragmentary images, the deepest depression imaginable, efforts to destroy yourself, and an almost complete break with what's happening in the world around you. That was my experience. I wish it upon no one.

The essays of The Loneliest Places began as a chronicle of Rachel Dickinson's life after her son's suicide. The pieces became much more. Dickinson writes the unimaginable and terrifying facts of heartbreaking loss. In The Loneliest Places she tells stories from her months on the run, fleeing her grief and herself, as she escapes to Iceland and the Falkland Islands--as far as possible from the memories of her dead son, Jack. She frankly relates the paralyzing emotion that sometimes left her trapped in her home, confined to a single chair, helplessly isolated. The tales from these years are bleak and Dickinson's journey home, back to her changed self and fractured family, is lonely. Conjuring Emily Dickinson, however, she describes how hope was sighted, allowed to perch, and then, remarkably, made actual.
Rachel Dickinson is a travel writer, essayist, artist, and award-winning author. Follow her on Twitter @rachelbirds.