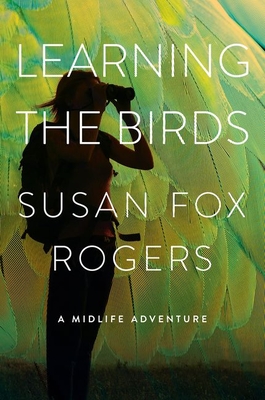 The thrill of quiet adventure. The constant hope of discovery. The reminder that the world is filled with wonder. When I bird, life is bigger, more vibrant. That is why Susan Fox Rogers is a birder. Learning the Birds is the story of how encounters with birds recharged her adventurous spirit.

When the birds first called, Rogers was in a slack season of her life. The woods and rivers that enthralled her younger self had lost some of their luster. It was the song of a thrush that reawakened Rogers, sparking a long-held desire to know the birds that accompanied her as she rock climbed and paddled, to know the world around her with greater depth. Energized by her curiosity, she followed the birds as they drew her deeper into her authentic self, and ultimately into love.

In Learning the Birds, we join Rogers as she becomes a birder and joins the community of passionate and quirky bird people. We meet her birding companions close to home in New York State's Hudson Valley as well as in the desert of Arizona and awash in the midnight sunlight of Alaska. Along on the journey are birders and estimable ornithologists of past generations--people like Franklin Delano Roosevelt and Florence Merriam Bailey--whose writings inspire Rogers's adventures and discoveries. A ready, knowledgeable, and humble friend and explorer, Rogers is eager to share what she sees and learns. Learning the Birds will remind you of our passionate need for wonder and our connection to the wild creatures with whom we share the land.
Susan Fox Rogers is Writer in Residence at Bard College. She is the author of My Reach and the editor of twelve anthologies, including When Birds Are Near.