The Pragmatic Turn in Law: Inference and Interpretation in Legal Discourse (Hardcover) 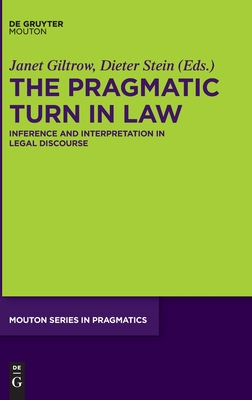 The Pragmatic Turn in Law: Inference and Interpretation in Legal Discourse (Hardcover)

In legal interpretation, where does meaning come from? Law is made from language, yet law, unlike other language-related disciplines, has not so far experienced its "pragmatic turn" towards inference and the construction of meaning. This book investigates to what extent a pragmatically based view of l linguistic and legal interpretation can lead to new theoretical views for law and, in addition, to practical consequences in legal decision-making.
With its traditional emphasis on the letter of the law and the immutable stability of a text as legal foundation, law has been slow to take the pragmatic perspective: namely, the language-user's experience and activity in making meaning. More accustomed to literal than to pragmatic notions of meaning, that is, in the text rather than constructed by speakers and hearers ... the disciplines of law may be culturally resistant to the pragmatic turn. By bringing together the different but complementary perspectives of pragmaticians and lawyers, this book addresses the issue of to what extent legal meaning can be productively analysed as deriving from resources beyond the text, ... beyond the letter of the law.
This collection re-visits the feasibility of the notion of literal meaning for legal interpretation and, at the same time, the feasibility of pragmatic meaning for law. Can explications of pragmatic meaning support court actions in the same way concepts of literal meaning have traditionally supported statutory interpretations and court judgements? What are the consequences of a user-based view of language for the law, in both its practices of interpretation and its definition of itself as a field? Readers will find in this collection means of approaching such questions, and promising routes for inquiry into the genre- and field-specific characteristics of inference in law.
In many respects, the problem of literal vs. pragmatic... meaning confined to the text vs. reaching beyond it ... will appear to parallel the dichotomy in law between textualism and intentionalism. There are indeed illuminating connections between the pair of linguistic terms and the more publicly controversial legal ones. But the parallel is not exact, and the linguistic dichotomy is in any case anterior to the legal one. Even as linguistic-pragmatic investigation may serve legal domains, the legal questions themselves point back to central conditions of all linguistic meaning.