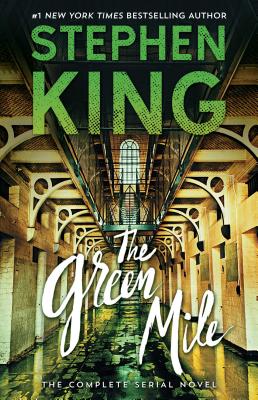 
Usually Ships in 1-5 Days
Masterfully told and as suspenseful as it is haunting, The Green Mile is Stephen King’s classic #1 New York Times bestselling dramatic serial novel and inspiration for the Oscar-nominated film starring Tom Hanks.

Welcome to Cold Mountain Penitentiary, home to the Depression-worn men of E Block. Convicted killers all, each awaits his turn to walk “the Green Mile,” the lime-colored linoleum corridor leading to a final meeting with Old Sparky, Cold Mountain’s electric chair. Prison guard Paul Edgecombe has seen his share of oddities over the years working the Mile, but he’s never seen anything like John Coffey—a man with the body of a giant and the mind of a child, condemned for a crime terrifying in its violence and shocking in its depravity. And in this place of ultimate retribution, Edgecombe is about to discover the terrible, wondrous truth about John Coffey—a truth that will challenge his most cherished beliefs….
Stephen King is the author of more than sixty books, all of them worldwide bestsellers. His recent work includes Fairy Tale, Billy Summers, If It Bleeds, The Institute, Elevation, The Outsider, Sleeping Beauties (cowritten with his son Owen King), and the Bill Hodges trilogy: End of Watch, Finders Keepers, and Mr. Mercedes (an Edgar Award winner for Best Novel and a television series streaming on Peacock). His novel 11/22/63 was named a top ten book of 2011 by The New York Times Book Review and won the Los Angeles Times Book Prize for Mystery/Thriller. His epic works The Dark Tower, It, Pet Sematary, and Doctor Sleep are the basis for major motion pictures, with It now the highest-grossing horror film of all time. He is the recipient of the 2020 Audio Publishers Association Lifetime Achievement Award, the 2018 PEN America Literary Service Award, the 2014 National Medal of Arts, and the 2003 National Book Foundation Medal for Distinguished Contribution to American Letters. He lives in Bangor, Maine, with his wife, novelist Tabitha King.