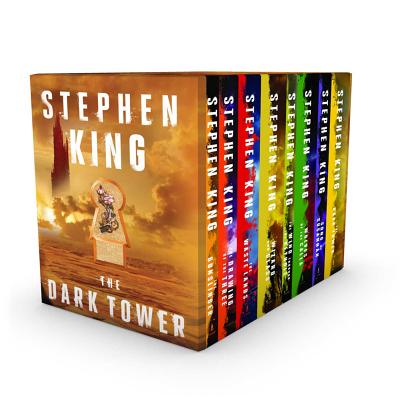 This is book number 1 in the The Dark Tower series.

For the first time ever in a single boxed set, all of Stephen King’s eight Dark Tower novels—one of the most acclaimed and popular series of all time.

Set in a world of ominous landscape and macabre menace, The Dark Tower series features one of Stephen King’s most powerful creations—The Gunslinger—a haunting figure who embodies the qualities of the lone hero through the ages, from ancient myth to frontier Western legend. As Roland crosses a desert of damnation in a treacherous world that is a twisted image of our own, he moves ever closer to the Dark Tower of his dreams—and nightmares.

This stunning, must-have collection includes: The Dark Tower I: The Gunslinger; The Dark Tower II: The Drawing of the Three; The Dark Tower III: The Waste Lands; The Dark Tower IV: Wizard and Glass; The Dark Tower: The Wind Through the Keyhole; The Dark Tower V: Wolves of the Calla; The Dark Tower VI: Song of Susannah; and The Dark Tower VII: The Dark Tower. The perfect keepsake for Stephen King fans, The Dark Tower 8-Book Boxed Set is the most extraordinary and imaginative cycle of tales in the English language from “the reigning King of American popular literature” (Los Angeles Daily News).
Stephen King is the author of more than sixty books, all of them worldwide bestsellers. His recent work includes Fairy Tale, Billy Summers, If It Bleeds, The Institute, Elevation, The Outsider, Sleeping Beauties (cowritten with his son Owen King), and the Bill Hodges trilogy: End of Watch, Finders Keepers, and Mr. Mercedes (an Edgar Award winner for Best Novel and a television series streaming on Peacock). His novel 11/22/63 was named a top ten book of 2011 by The New York Times Book Review and won the Los Angeles Times Book Prize for Mystery/Thriller. His epic works The Dark Tower, It, Pet Sematary, and Doctor Sleep are the basis for major motion pictures, with It now the highest-grossing horror film of all time. He is the recipient of the 2020 Audio Publishers Association Lifetime Achievement Award, the 2018 PEN America Literary Service Award, the 2014 National Medal of Arts, and the 2003 National Book Foundation Medal for Distinguished Contribution to American Letters. He lives in Bangor, Maine, with his wife, novelist Tabitha King.