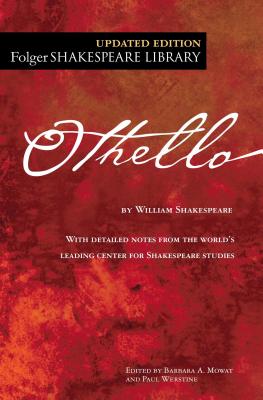 In Othello, William Shakespeare creates powerful drama from a marriage between the exotic Moor Othello and the Venetian lady Desdemona that begins with elopement and mutual devotion and ends with jealous rage and death. Shakespeare builds many differences into his hero and heroine, including race, age, and cultural background. Yet most readers and audiences believe the couple’s strong love would overcome these differences were it not for Iago, who sets out to destroy Othello. Iago’s false insinuations about Desdemona’s infidelity draw Othello into his schemes, and Desdemona is subjected to Othello’s horrifying verbal and physical assaults.

The authoritative edition of Othello from The Folger Shakespeare Library, the trusted and widely used Shakespeare series for students and general readers, includes:

—A key to famous lines and phrases

—An introduction to reading Shakespeare's language

—An essay by a leading Shakespeare scholar providing a modern perspective on the play
William Shakespeare was born in April 1564 in the town of Stratford-upon-Avon, on England’s Avon River. When he was eighteen, he married Anne Hathaway. The couple had three children—an older daughter Susanna and twins, Judith and Hamnet. Hamnet, Shakespeare’s only son, died in childhood. The bulk of Shakespeare’s working life was spent in the theater world of London, where he established himself professionally by the early 1590s. He enjoyed success not only as a playwright and poet, but also as an actor and shareholder in an acting company. Although some think that sometime between 1610 and 1613 Shakespeare retired from the theater and returned home to Stratford, where he died in 1616, others believe that he may have continued to work in London until close to his death.