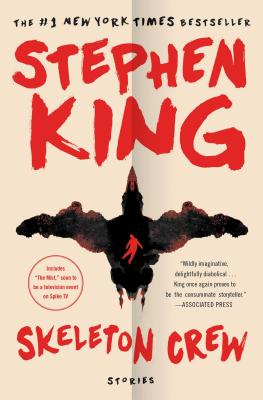 Features “The Mist” now a TV series event on Spike

The #1 New York Times bestseller and winner of the 1986 Locus Award for Best Collection, Skeleton Crew is “Stephen King at his best” (The Denver Post)—a terrifying, mesmerizing collection of stories from the outer limits of one of the greatest imaginations of our time.

“Wildly imaginative, delightfully diabolical…King once again proves to be the consummate storyteller” (The Associated Press).

A supermarket becomes the place where humanity makes its last stand against destruction. A trip to the attic becomes a journey to hell. A woman driving a Jaguar finds a scary shortcut to paradise. An idyllic lake harbors a bottomless evil. And a desert island is the scene of the most terrifying struggle for survival ever waged. This “wonderfully gruesome” collection (The New York Times Book Review) includes:

King is best known for his iconic, immersive long novels, but he is also a master of the short story, and this is a magnificent collection.
Stephen King is the author of more than sixty books, all of them worldwide bestsellers. His recent work includes Fairy Tale, Billy Summers, If It Bleeds, The Institute, Elevation, The Outsider, Sleeping Beauties (cowritten with his son Owen King), and the Bill Hodges trilogy: End of Watch, Finders Keepers, and Mr. Mercedes (an Edgar Award winner for Best Novel and a television series streaming on Peacock). His novel 11/22/63 was named a top ten book of 2011 by The New York Times Book Review and won the Los Angeles Times Book Prize for Mystery/Thriller. His epic works The Dark Tower, It, Pet Sematary, Doctor Sleep, and Firestarter are the basis for major motion pictures, with It now the highest-grossing horror film of all time. He is the recipient of the 2020 Audio Publishers Association Lifetime Achievement Award, the 2018 PEN America Literary Service Award, the 2014 National Medal of Arts, and the 2003 National Book Foundation Medal for Distinguished Contribution to American Letters. He lives in Bangor, Maine, with his wife, novelist Tabitha King.
“Wonderfully gruesome…Don’t turn your back on this book.”
— The New York Times Book Review

“Wildly imaginative, delightfully diabolical…King once again proves to be the consummate storyteller.”
— The Associated Press