House of Names: A Novel (Paperback) 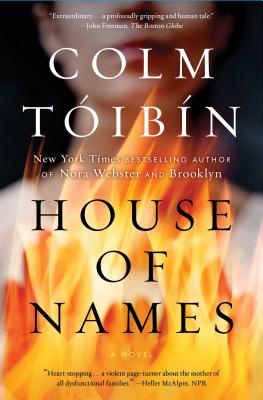 From the thrilling imagination of bestselling, award-winning Colm Tóibín comes a retelling of the story of Clytemnestra and her children—“brilliant…gripping…high drama…made tangible and graphic in Tóibín’s lush prose” (Booklist, starred review).

“I have been acquainted with the smell of death.” So begins Clytemnestra’s tale of her own life in ancient Mycenae, the legendary Greek city from which her husband King Agamemnon left when he set sail with his army for Troy. Clytemnestra rules Mycenae now, along with her new lover Aegisthus, and together they plot the bloody murder of Agamemnon on the day of his return after nine years at war.

Judged, despised, cursed by gods, Clytemnestra reveals the tragic saga that led to these bloody actions: how her husband deceived her eldest daughter Iphigeneia with a promise of marriage to Achilles, only to sacrifice her; how she seduced and collaborated with the prisoner Aegisthus; how Agamemnon came back with a lover himself; and how Clytemnestra finally achieved her vengeance for his stunning betrayal—his quest for victory, greater than his love for his child.

House of Names “is a disturbingly contemporary story of a powerful woman caught between the demands of her ambition and the constraints on her gender…Never before has Tóibín demonstrated such range,” (The Washington Post). He brings a modern sensibility and language to an ancient classic, and gives this extraordinary character new life, so that we not only believe Clytemnestra’s thirst for revenge, but applaud it. Told in four parts, this is a fiercely dramatic portrait of a murderess, who will herself be murdered by her own son, Orestes. It is Orestes’s story, too: his capture by the forces of his mother’s lover Aegisthus, his escape and his exile. And it is the story of the vengeful Electra, who watches over her mother and Aegisthus with cold anger and slow calculation, until, on the return of her brother, she has the fates of both of them in her hands.

Colm Tóibín is the author of ten novels, including The Magician, winner of the Rathbones Folio Prize; The Master, winner of the Los Angeles Times Book Prize; Brooklyn, winner of the Costa Book Award; The Testament of Mary; and Nora Webster, as well as two story collections and several books of criticism. He is the Irene and Sidney B. Silverman Professor of the Humanities at Columbia University and has been named as the laureate for Irish fiction for 2022–2025 by the Arts Council of Ireland. Three times shortlisted for the Booker Prize, Tóibín lives in Dublin and New York.

"Brilliant...Tóibín's accomplishment here is to render myth plausible while at the same time preserving its high drama... gripping... The selfish side of human nature is... made tangible and graphic in Tóibín's lush prose."
— Booklist, STARRED review

"Clytemnsestra, narrating in the first person, is a captivating and terrifying figure, heartbroken and ruthless in her lust for power... Tóibín captures the way that corruption breeds resentment and how resentment almost unstoppably breeds violence. The original myths established these characters as the gods' playthings, but Tóibín reframes this version in a 'time when the gods are fading' the besster to lay the blame for our human failures plainly on ourselves."
— Kirkus Reviews

“A taut retelling of a foundational Western story…this extraordinary book reads like a pristine translation rather than a retelling, conveying both confounded strangeness and timeless truths about love’s sometimes terrible and always exhilarating energies.”
— Library Journal, Starred Review

"A dramatic, intimate chronicle of a family implosion set in unsettling times as gods withdraw from human affairs. Far from the Brooklyn or Ireland of his recent bestsellers, Tóibín explores universal themes of failure, loss, loneliness, and repression.”

"Written with the ‘knowledge that the time of the gods has passed,’ Colm Toibin’s take on the classic myth of Agamemnon and Clytemnestra in House of Names evokes a husband’s vanity and a wife’s rage, casting the fragility of our closest bonds in fresh light.”
— Vogue

“A creative reanimation of these indelible characters who are still breathing down our necks across the millennia… [Tóibín] pumps blood even into the silent figures of Greek tragedy… Despite the passage of centuries, this is a disturbingly contemporary story of a powerful woman caught between the demands of her ambition and the constraints on her gender…Never before has Tóibín demonstrated such range, not just in tone but in action. He creates the arresting, hushed scenes for which he’s so well known just as effectively as he whips up murders that compete, pint for spilled pint, with those immortal Greek playwrights.”
— Ron Charles

“Although a reader may know what’s coming, the novel’s imaginative take on the twisted psychology behind the horrific acts is what keeps it compelling… The final chapters are among the most mysterious and beautiful Tóibín has written; a high bar.”
— Claude Peck

“[An] extraordinary new novel… Drawing upon Greek tragedy as deftly as he borrowed the story of the Virgin mother in his 2013 Booker Prize finalist novel, The Testament of Mary, Tóibín has found the gaps in the myth, reimagining all as a profoundly gripping and human tale… you can see at once the marvelous writer Tóibín is, and how he works best under a set of self-imposed restrictions…"
— John Freeman

“Mr. Tóibín is exemplary of modern methods, a careful, Jamesian portraitist of exquisite finesse and understatement… as finely written as any of his books."
— Sam Sacks

“Simply and inexorably, Tóibín spins the deadly tale we remember so well from our schooldays…It is Tóibín’s unembellished prose that grips us, pulling us anew into an old story, one whose ending we know yet cannot put down.  We are also struck by the emotional distance he gives his characters, one from the other, except in rare instances – a family dynamic bred of damage… riveting and relevant and a fine addition to the growing canon of works by Colm Tóibín.”
— Karen Brady

“The misadventures of Agamemnon and his family were repeatedly retold in Greek mythology…In his new novel, House of Names, Colm Toibin explores part of this story, from the murder of Iphigenia to the murder of Clytemnestra, making it strike a new chord, far more impressive than the pious respect or worthy aura of ‘classicism’ that often surrounds it. Part of Toibin’s success comes down to the power of his writing: an almost unfaultable combination of artful restraint and wonderfully observed detail….[this] transforms his account of the sacrifice of Iphigenia from what could all too easily have been a ghastly version of operatic bombast into a moving tragedy on a human scale…he is also very good on exploiting the puzzling gaps in the ancient narrative, especially where Orestes is concerned…But Toibin has bigger themes in mind, too, particularly the cycle of violence that seems to trap the family of Agamemnon.”
— Mary Beard

“A modernized masterpiece…an excellent read that will appeal to all audiences and make real the Greek tragedy readers only thought they understood.”
— The Deseret News

“Exquisite…[Toibin] makes modern psychological drama out of the Greek mythological cycles of violence that destroyed Clytemnestra and her family, wresting human motives out of stories that might otherwise feel alien to our culture.”
— Boris Kachka

“House of Names works because of the empathy and depth Tóibín brings to these suffering, tragically fallible characters, all destined to pass on "into the abiding shadows" — yet vividly alive in this gripping novel.”
— Heller McAlpin

“[A] psychologically probing and intimate retelling of the Greek tragedy…Toibin’s prose is stark and mesmerizingly readable. It reveals the horrors but doesn’t sensationalize them — which makes them even more horrific, as he meticulously reproduces the inexorable and inevitabilities of Greek tragedy. The calm ruthlessness of the tale adds to its terrors…[a] magnificent novel.”
— Sam Coale

"A giant amongst storytellers, Toibin has thrown down the gauntlet with his latest novel . . . And it is a masterpiece."
— Edith Hall

"A Greek House of Cards... Just like Heaney at the end of his Mycenae lookout, Toibin's novel augurs an era of renewal that comes directly from the cessation of hostilities."
— Fiona Macintosh

"Tóibín's retelling is governed by compassion and responsibility, and focuses on the horrors that led Clytemnestra to her terrible vengeance. Her sympathetic first-person narrative makes even murder, for a moment, seem reasonable (...) Tóibín's prose is precise and unadorned, the novel's moments of violence told with brutal simplicity. But its greatest achievement is as a page-turner. In a tale that has ended the same way for thousands of years, Tóibín makes us hope for a different outcome."
— James Reith

"In a novel describing one of the Western world's oldest legends, in which the gods are conspicuous by their absence, Tóibín achieves a paradoxical richness of characterisation and a humanisation of the mythological, marking House Of Names as the superbly realised work of an author at the top of his game."
— Daily Express

"Colm Tóibín turns Greek Myths into flesh and blood..The writing is characteristically elegant, spare and subtle. ..The scenes between Clytemnestra and her lover Aegisthus darkly sexy."
— The Times

"Mesmerizing... [House of Names] balances the restraint of neoclassical art with the frenzy of a Pollock painting."