The Face of the Unknown (Star Trek: The Original Series) (Mass Market) 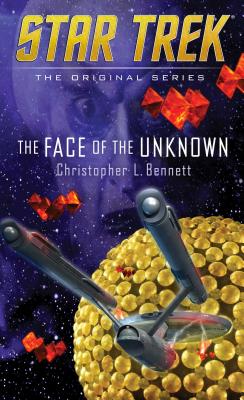 By Christopher L. Bennett
$9.99
Email or call for price

Investigating a series of violent raids by a mysterious predatory species, Captain James T. Kirk discovers that these events share a startling connection with the First Federation, a friendly but secretive civilization contacted early in the USS Enterprise’s five-year mission. Traveling to the First Federation in search of answers, the Enterprise suddenly comes under attack from these strange marauders. Seeking refuge, the starship finds its way to the true home of the First Federation, an astonishing collection of worlds hidden from the galaxy beyond. The inhabitants of this isolated realm are wary of outsiders, and some accuse Kirk and his crew for bringing the wrath of their ancient enemy down upon them. When an attempt to stave off disaster goes tragically wrong, Kirk is held fully accountable, and Commander Spock learns there are even deeper forces that threaten this civilization. If Kirk and Spock cannot convince the First Federation's leaders to overcome their fears, the resulting catastrophe could doom them all!

Christopher L. Bennett is a lifelong resident of Cincinnati, Ohio, with bachelor’s degrees in physics and history from the University of Cincinnati. He has written such critically acclaimed Star Trek novels as Ex Machina, The Buried Age, the Titan novels Orion’s Hounds and Over a Torrent Sea, the two Department of Temporal Investigations novels Watching the Clock and Forgotten History, and the Enterprise novels Rise of the Federation: A Choice of Futures, Tower of Babel, Uncertain Logic, and Live By the Code, as well as shorter works including stories in the anniversary anthologies Constellations, The Sky’s the Limit, Prophecy and Change, and Distant Shores. Beyond Star Trek, he has penned the novels X Men: Watchers on the Walls and Spider Man: Drowned in Thunder. His original work includes the hard science fiction superhero novel Only Superhuman, as well as several novelettes in Analog and other science fiction magazines.