One Giant Leap: The Impossible Mission That Flew Us to the Moon (Hardcover) 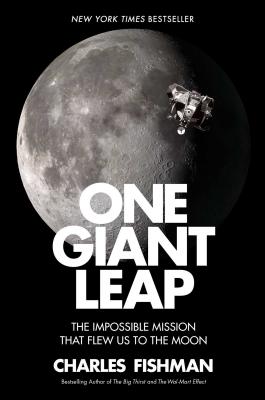 One Giant Leap: The Impossible Mission That Flew Us to the Moon (Hardcover)


Email or call for price
The remarkable story of the trailblazers and the ordinary Americans on the front lines of the epic mission to reach the moon.

President John F. Kennedy astonished the world on May 25, 1961, when he announced to Congress that the United States should land a man on the Moon by 1970. No group was more surprised than the scientists and engineers at NASA, who suddenly had less than a decade to invent space travel.

When Kennedy announced that goal, no one knew how to navigate to the Moon. No one knew how to build a rocket big enough to reach the Moon, or how to build a computer small enough (and powerful enough) to fly a spaceship there. No one knew what the surface of the Moon was like, or what astronauts could eat as they flew there. On the day of Kennedy’s historic speech, America had a total of fifteen minutes of spaceflight experience—with just five of those minutes outside the atmosphere. Russian dogs had more time in space than U.S. astronauts. Over the next decade, more than 400,000 scientists, engineers, and factory workers would send 24 astronauts to the Moon. Each hour of space flight would require one million hours of work back on Earth to get America to the Moon on July 20, 1969.

More than fifty years later, One Giant Leap is the sweeping, definitive behind-the-scenes account of the furious race to complete one of mankind’s greatest achievements. It’s a story filled with surprises—from the item the astronauts almost forgot to take with them (the American flag), to the extraordinary impact Apollo would have back on Earth, and on the way we live today.

Charles Fishman introduces readers to the men and women who had to solve 10,000 problems before astronauts could reach the Moon. From the research labs of MIT, where the eccentric and legendary pioneer Charles Draper created the tools to fly the Apollo spaceships, to the factories where dozens of women sewed spacesuits, parachutes, and even computer hardware by hand, Fishman captures the exceptional feats of these ordinary Americans. One Giant Leap is the captivating story of men and women charged with changing the world as we knew it—their leaders, their triumphs, their near disasters, all of which led to arguably the greatest success story, and the greatest adventure story, of the twentieth century.
Charles Fishman is the acclaimed author of One Giant Leap, A Curious Mind (with Brian Grazer), The Wal-Mart Effect, and The Big Thirst. He is a three-time winner of the Gerald Loeb Award, the most prestigious prize in business journalism.
"In his meticulously researched and absorbingly written book, journalist Charles Fishman provides both a celebration of the Apollo 11 mission and a corrective to some of the myths that have crystallized around it." —The Washington Post

"Mr. Fishman is a veteran space reporter with a vibrant touch—nearly every sentence has a fact, an insight, a colorful quote or part of a piquant anecdote. What’s more, he has pondered the meaning of the moon landing and arrived at a surprising and persuasive answer. . . . Mr. Fishman is a connoisseur of fascinating detail, as well." —The Wall Street Journal

"With the upcoming 50th anniversary of the Apollo 11 landing, this compelling read is highly recommended. . . . [Fishman] skillfully tells the remarkable story of the event . . . [and] provides fasicinating details about the mission." —Library Journal, starred review

"A fresh, enthusiastic history of the moon mission . . . Rather than focus on the astronauts, journalist Fishman offers lively profiles of many tireless, imaginative, and innovative scientists, engineers, and technicians who contributed to the Apollo mission." —Kirkus Reviews

"Astronauts take a back seat to politicians, project managers, engineers, and the marvelous machines they created in this engrossing history of the moon landings. . . . Fishman’s knack for explaining science and engineering and his infectious enthusiasm for Apollo’s can-do wizardry make for a fascinating portrait of a technological heroic age." —Publishers Weekly

“A work that will reward readers with new angles on a familiar story.” —Booklist

“The best Apollo anniversary treatment I’ve seen so far. . . In One Giant Leap, Charles Fishman has not only provided a vivid account of the historic Apollo 11 mission. He has also thought hard and written cogently about the character of Project Apollo, and especially about both John Kennedy’s continued commitment to a Moon landing ‘before this decade is out’ and the broad impacts of Apollo on American society. While I don’t agree totally with his conclusions, it is refreshing to see him go beyond the usual platitudes to careful analysis and reasoned judgments. This is a book worth careful reading.” —John M. Logsdon, author of John F. Kennedy and the Race to the Moon

"This is the most comprehensive and detailed account of the Apollo 11 mission. Fishman investigates the myriad scientists and engineers behind the project, details the challenges of the untried computer systems and especially documents the dramatic race in time to meet President Kennedy’s mandate." —Columbus Dispatch

"For a one-stop overview of how Apollo unfolded, One Giant Leap by journalist Charles Fishman wins." —Nature

"In Fishman’s One Giant Leap, the veteran space journalist ably explains the challenges facing NASA engineers as they sought to overtake their accomplished Soviet counterparts. . . .Most comprehensive." —The San Francisco Chronicle

"Thousands of people had to accomplish herculean and seemingly impossible tasks in order to get us to the moon—and it's been 50 years since Neil Armstrong took that one small step. Fishman explains in dazzling form just how unbelievable it actually was." —Newsweek