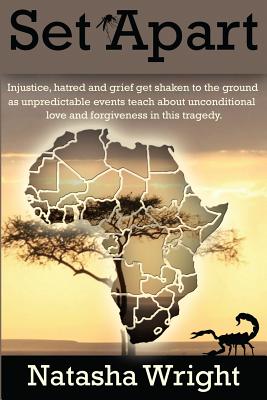 
Usually Ships in 1-5 Days
(This book cannot be returned.)
Jacob Modise is an average thirteen year old child, living in an informal settlement during the late apartheid years in South Africa. Until one September afternoon, nothing could prepare him for how brutally his future would change. Facing not only racism and hatred, Jacob finds himself on a journey of starvation and unbearable loss as he fights for survival through the African wilderness. It is on this journey that he becomes a man and what lies in the path of his discovery, is as unpredictable as the friendships he establishes along the way. Lucy Morrison; a dainty British police officer takes on an Interpol exchange program in South Africa. She catches herself from falling in love, becomes entangled in a web of corruption and befriends Jacob, who changes her life forever. But she soon realizes that she could never return to normality as she had once perceived it to be and as the chapters of her new life opens in tragedy, she knows that things could only get better in the future. Injustice, hatred and grief get shaken to the ground as unpredictable and even bizarre events teach about unconditional love and forgiveness, in this tragedy.
Born in 1985 in Kwa-Zulu Natal and then raised in one of Pretoria's poorest neighborhoods, Natasha (Craggs) Wright had a militaristic upbringing with both parents working in the Police force. After school she went in search for greener pastures and settled in the very wet Snowdonia in North Wales where she met her husband. They moved to Cantabria, Northern Spain after the birth of their second child. It was there, between late night fiestas and mid morning Spanish lessons that she started to write Set Apart. It flowed, from the homesickness within her - the longing for everything good and everything bad in her home country - onto sheet after sheet, and indeed notebook after notebook. Those close to her said it was the only thing that kept her going, and after a year of research, writing and wrestling with the demons of longing she completed the first draft. What then followed was a complete nervous collapse and two years of soul-searching that pushed her to finalize the manuscript to the best of her ability. Today she runs a busy household in the beautiful hills of Shropshire and she has finally come to terms with loving her beautiful homeland from a distance.