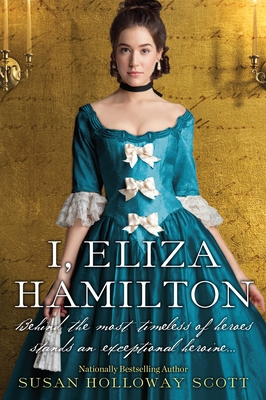 
Usually Ships in 1-5 Days
In this beautifully written novel of historical fiction, bestselling author Susan Holloway Scott tells the story of Alexander Hamilton’s wife, Eliza—a fascinating, strong-willed heroine in her own right and a key figure in one of the most gripping periods in American history.

“Love is not easy with a man chosen by Fate for greatness . . .”

As the daughter of a respected general, Elizabeth Schuyler is accustomed to socializing with dignitaries and soldiers. But no visitor to her parents’ home has affected her so strongly as Alexander Hamilton, a charismatic, ambitious aide to George Washington. They marry quickly, and despite the tumult of the American Revolution, Eliza is confident in her brilliant husband and in her role as his helpmate. But it is in the aftermath of war, as Hamilton becomes one of the country’s most important figures, that she truly comes into her own.

In the new capital, Eliza becomes an adored member of society, respected for her fierce devotion to Hamilton as well as her grace. Behind closed doors, she astutely manages their expanding household, and assists her husband with his political writings. Yet some challenges are impossible to prepare for. Through public scandal, betrayal, personal heartbreak, and tragedy, she is tested again and again. In the end, it will be Eliza’s indomitable strength that makes her not only Hamilton’s most crucial ally in life, but also his most loyal advocate after his death, determined to preserve his legacy while pursuing her own extraordinary path through the nation they helped shape together.
Susan Holloway Scott is the author of over fifty historical novels. Writing under several pen names, she has received numerous awards and critical acclaim for her bestselling books. Over three million copies of her books are in print, and her work has been published in nineteen foreign countries and translated into fourteen different languages.

A frequent speaker at museums, colleges, and historical sites, Susan also maintains a world-wide following on social media through her blog, Twitter, and Instagram accounts. She is a graduate of Brown University, and lives with her family outside of Philadelphia. For more information about Susan and her books, visit her website at www.susanhollowayscott.com.

Praise for I, ELIZA HAMILTON

“Scott expertly handles the complex history and complicated romance, moving the personal and political plots briskly…Readers will be captivated by the affecting portrait Scott has painted of Eliza as an American patriot who was witness and counsel to Alexander’s enduring legacy.” - Publishers Weekly (starred review)

“Scott’s devotion to research is evident, and those who enjoy learning about history through fiction should find this to be a rewarding take on a fascinating historical couple.” – Library Journal

“I, Eliza Hamilton is going to be your next Hamilton obsession." – Bustle

“With the recent popularity of Alexander Hamilton comes the much deserved interest in his wife, Eliza. We've heard so much about Hamilton's story (thanks to his endless writings), but Susan Holloway Scott has introduced Eliza's voice into the mix. This piece of historical fiction tells the true story of Eliza Hamilton in a narrative that captures both her kindness and strength.” – Gillian Pensavalle, The Hamilcast: A Hamilton Podcast

“While you’re waiting for Hamilton tickets, or if you’re obsessed with American history, this is the book to read this fall. Scott…brings a fascinating woman and tumultuous era to full-fledged life. The lavish details and meticulous research add resonance to Eliza’s voice as she relates the story of her marriage. The sensitive portrayal is a testament to the Hamilton’s abiding love and strong relationship, and proof of one woman’s courage.” - RT Book Reviews

“Based on solid research, Scott’s novel is packed with political and historical as well as domestic details.” - Booklist

“One of the best novels I’ve read in a long time.” –The Reverie Review