Black Montana: Settler Colonialism and the Erosion of the Racial Frontier, 1877-1930 (Hardcover) 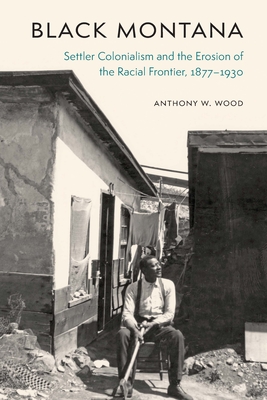 Black Montana: Settler Colonialism and the Erosion of the Racial Frontier, 1877-1930 (Hardcover)

Toward the end of the nineteenth century, many African Americans moved westward as Greater Reconstruction came to a close. Though, along with Euro-Americans, Black settlers appropriated the land of Native Americans, sometimes even contributing to ongoing violence against Indigenous people, this migration often defied the goals of settler states in the American West.

In Black Montana Anthony W. Wood explores the entanglements of race, settler colonialism, and the emergence of state and regional identity in the American West during the nineteenth and twentieth centuries. By producing conditions of social, cultural, and economic precarity that undermined Black Montanans’ networks of kinship, community, and financial security, the state of Montana, in its capacity as a settler colony, worked to exclude the Black community that began to form inside its borders after Reconstruction.

Black Montana depicts the history of Montana’s Black community from 1877 until the 1930s, a period in western American history that represents a significant moment and unique geography in the life of the U.S. settler-colonial project.
Anthony W. Wood is a PhD candidate in the Department of History at the University of Michigan. He worked as a historian for the Montana Historical Society on Montana’s African American Heritage Places Project.
“Through meticulous research, Anthony Wood has crafted a fascinating and nuanced account of the rise and fall of Montana’s Black communities in the late nineteenth and early twentieth centuries. . . . The book reveals how crucial notions of whiteness and white supremacy are to the region and nation.”—Laurie Mercier, author of Speaking History: The American Past through Oral Histories, 1865–2001

“In addition to excavating an often erased social history of Black Montanans . . . Anthony Wood’s sophisticated use of settler-colonial theories provides a powerful analysis of racial formation, exclusion, and elimination. A work of cutting-edge scholarship, Black Montana is essential reading for those seeking a deeper understanding of the structures of race in the American West.”—Jeffrey Ostler, author of Surviving Genocide: Native Nations and the United States from the American Revolution to Bleeding Kansas

“The history of African Americans in the Rocky Mountains is still underdeveloped. Black Montana is important both for its work on bringing attention to the experience of Black Montanans and as a case study in the epistemology of settler colonialism.”—Jason E. Pierce, author of Making the White Man’s West