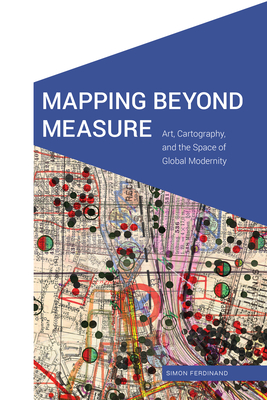 
Usually Ships in 1-5 Days
Over the last century a growing number of visual artists have been captivated by the entwinements of beauty and power, truth and artifice, and the fantasy and functionality they perceive in geographical mapmaking. This field of “map art” has moved into increasing prominence in recent years yet critical writing on the topic has been largely confined to general overviews of the field.

In Mapping Beyond Measure Simon Ferdinand analyzes diverse map-based works of painting, collage, film, walking performance, and digital drawing made in Britain, Japan, the Netherlands, Ukraine, the United States, and the former Soviet Union, arguing that together they challenge the dominant modern view of the world as a measurable and malleable geometrical space. This challenge has strong political ramifications, for it is on the basis of modernity’s geometrical worldview that states have legislated over social space; that capital has coordinated global markets and exploited distant environments; and that powerful cartographic institutions have claimed exclusive authority in mapmaking.

Mapping Beyond Measure breaks fresh ground in undertaking a series of close readings of significant map artworks in sustained dialogue with spatial theorists, including Peter Sloterdijk, Zygmunt Bauman, and Michel de Certeau. In so doing Ferdinand reveals how map art calls into question some of the central myths and narratives of rupture through which modern space has traditionally been imagined and establishes map art’s distinct value amid broader contemporary shifts toward digital mapping.

Simon Ferdinand is a lecturer in literary and cultural analysis at the University of Amsterdam. He is the coeditor of Other Globes: Past and Peripheral Imaginations of Globalization.

"Mapping Beyond Measure participates in a broader scholarly discussion about the cultural formation of geographic knowledge and the ways that we think about and experience our place in the world through maps and other cultural representations of the earth. The book also provides a valuable resource for a growing number of historians who use digital mapping as a method of inquiry."—Kristan M. Hanson, H-Maps

“In this thoughtful analysis of ‘map art’ Simon Ferdinand offers an innovative interpretation of contemporary artworks that tests and reconfigures the challenges and opportunities posed by the transformation in global modernity of our lived world into lines and grids. ‘I map, therefore I am modern’ is the resounding implication that emerges from Ferdinand’s perceptive exploration of how visual artists in our times have used the map form to relate to the world, to the globe, indeed to earth itself.”—Sumathi Ramaswamy, author of Terrestrial Lessons: The Conquest of the World as Globe

“This is an important book on a theoretical level. By looking at recent technologies as a continuation of existing ontologies, Ferdinand goes beyond the hype around digital mapping. The chapters touch deftly on many themes that will also be of interest to academic readers who don’t deal explicitly with maps in their work, including utopia, modernity, quantification, and futurism, among many others.”—Jess Bier, author of Mapping Israel, Mapping Palestine: How Occupied Landscapes Shape Scientific Knowledge