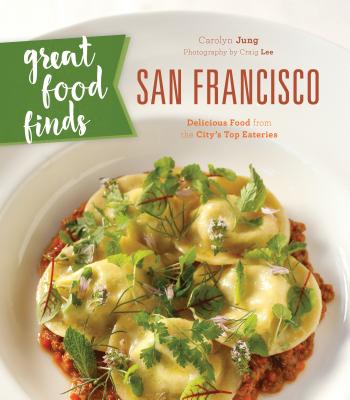 Carolyn Jung an award-winning food and wine writer based in the San Francisco Bay Area. She is the recipient of a James Beard Award for feature writing about restaurants/chefs, a Columbia University Graduate School of Journalism award of excellence for diversity writing, an award from the American Association of Sunday and Features Editors, and numerous first-place honors from the Association of Food Journalists, and the Peninsula Press Club. In 2015, she was named an IACP (International Association of Culinary Professionals) finalist for "narrative food writing." She has judged a bevy of food contests, including the biggie of them all, the Pillsbury Bake-Off. For eleven years, she was the food writer/editor for the San Jose Mercury News. She also was a contributor to the "Good Living" section of Gourmet magazine, and to the book, The Slow Food Guide to San Francisco and the Bay Area. Currently, she is a freelance food writer. Her work has appeared in the San Francisco Chronicle, San Francisco magazine, Silicon Valley magazine, Eating Well, Coastal Living, Food Arts, Wine Spectator, Every Day with Rachael Ray, Plate magazine, and other publications, including the online site, Tasting Table San Francisco. Her first cookbook, San Francisco Chef's Table, debuted in winter 2013. In 2008, she created FoodGal.com, a food and wine blog that features interviews with celebrated chefs, reviews of intriguing cookbooks and products, the scoop on new restaurants, irresistible recipes, and her singular take on how food touches every aspect of our lives. In 2009, her blog was awarded second place for "Best Food Blog" in the nation by the Association of Food Journalists. Craig Lee is an award-winning photographer based in the San Francisco Bay Area. He has worked for the San Francisco Examiner and the San Francisco Chronicle. His award-winning work earned Craig recognition from the National Press Photographers Association, Pictures of the Year, the Bay Area Press Photographers Association, and the Association of Food Journalists. While at the San Francisco Chronicle he was the photographer for the book The Working Cook and his work contributed to the Food and Wine section was recognized as the best in the nation in 2004, 2006, 2007 and 2011 by the James Beard Foundation. He continues to contribute as a freelance photographer for the San Francisco Chronicle and other publications such as the New York Times, Wall Street Journal, Sunset Magazine, and San Francisco Magazine. Explore more of his work at craigleephoto.com.