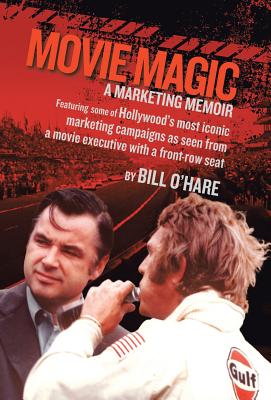 When you work on Hollywood blockbusters as a senior marketing executive at DCA, Continental Distributors, MGM, Cinema Center Films, Paramount, and Columbia Pictures, you meet some people.

For Bill O'Hare, that meant working with movie stars like John Wayne, Steve McQueen, Lee Marvin, and Elvis Presley--just to name a few.

Growing up as a kid in Lake Placid, New York, he never dreamed he'd end up working with such stars or that they'd actually listen to what he had to say.

In this behind-the-scenes memoir, O'Hare looks back at how he helped timeless films such as Doctor Zhivago, The Dirty Dozen, Viva Las Vegas, A Man Called Horse, and the 1967 re-release of Gone With the Wind become box-office smashes.

He also looks back at box-office busts such as Stanley Kubrick's 2001: A Space Odyssey and Lee Marvin's Monte Walsh and Le Mans.

Join one of Hollywood's leading marketers from the 1950s to the 1980s as he celebrates his craft and reminisces about being chauffeured in a Rolls-Royce with Sophia Loren, spending time at a race track with Steve McQueen, and enjoyingMovie Magic.