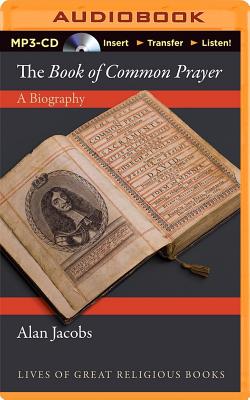 While many of us are familiar with such famous words as, "Dearly beloved, we are gathered together here..." or "Ashes to ashes, dust to dust," we may not know that they originated with The Book of Common Prayer, which first appeared in 1549.

Like the words of the King James Bible and Shakespeare, the language of this prayer book has saturated English culture and letters. Here Alan Jacobs tells its story. Jacobs shows how The Book of Common Prayer--from its beginnings as a means of social and political control in the England of Henry VIII to its worldwide presence today--became a venerable work whose cadences express the heart of religious life for many.

The book's chief maker, Thomas Cranmer, Archbishop of Canterbury, created it as the authoritative manual of Christian worship throughout England. But as Jacobs recounts, the book has had a variable and dramatic career in the complicated history of English church politics, and has been the focus of celebrations, protests, and even jail terms. As time passed, new forms of the book were made to suit the many English-speaking nations: first in Scotland, then in the new United States, and eventually wherever the British Empire extended its arm.

Over time, Cranmer's book was adapted for different preferences and purposes. Jacobs vividly demonstrates how one book became many--and how it has shaped the devotional lives of men and women across the globe.