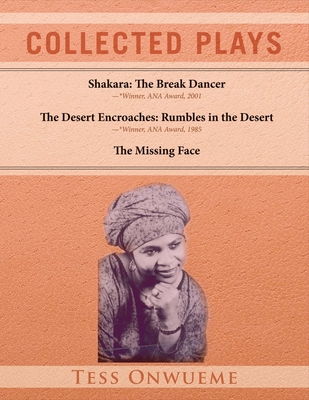 
Email or call for price
This collection of award-winning plays by Tess Onwueme feature the provocative concerns and experiences of global women and youth in today's struggle with poverty, environmental pollution, cultural imperialism, exploitation, race, gender and class inequities, along with the unresolved historical relationship matters between peoples of African descent in Africa and the Diaspora, dramatized in the contexts.

SHAKARA: THE BREAK DANCER:
The teenage Shakara and a school drop-out can no longer stand her poor mother with her “born-again” sister as squatters in a shanty owned by her employer drug baroness/socialite. Shakara joins a gang and flees home. Then the unexpected happens.

THE MISSING FACE:
In this meticulously paced play, Ida, a true optimist about love, family and her culture, takes a great leap in rearing her son, as she pulls him to the mythical African kingdom of Idu to locate his runaway father, and also to find the missing split image of the ancestral 'ikenga' that her own enslaved father in America had mandated her to do. They arrive in Africa to uncover the untold history of Africa with the Diaspora.


THE DESERT ENCROACHES: RUMBLES IN THE DESERT:
Winner of the 1985 Association of Nigerian Authors (ANA) Award for Drama, THE DESERT ENCROACHES is a fable or allegory featuring the Forest of Animals inhabiting marked zones and borders, where the dramatic actions take place. But all is not well in the animal forest. The playwright deploys fable, satire and allegory to dramatize today's 'poly-tricks' of environment, arms race and terror by world super-powers with dried-up conscience, as they (ab)use, and exploit the weak and poor animals of the South. These powerful forces represented in the play by animals of the North-West (like the Hawk and the Wolf), ravage the environment and manipulate all in their selective WMD arms control, which privilege their allies to silence, wound, humiliate, and choke the weaker animals like the Sheep, the Donkey and the Cow, who produce all the milk and meat for nourishing the super powers, only to get beaten/eaten up or consumed outright. The reality provokes the spirit of the suppressed animals of the South, for the Spider has risen and now stands tall among them to weave plots to unsettle the social order and disrupt the sleep of the world powers. Will the Forest of Animals survive the flaming body and soul of the land?
––Internationally renowned for her award-winning plays, Dr. Tess Onwueme is the literary soul-mate of Chinua Achebe, Wole Soyinka, and Ngugi wa Thiong’o. She is the first African woman dramatist to break into their ranks, so that What Mama Said, Tell it to Women, Shakara: Dance-Hall Queen, The Missing Face, The Desert Encroaches and the Reign of Wazobia become staples of international college and university curricular in the 21st century,” noted Professor Sonja Darlington. ––Among her literary soul-mates are Wole Soyinka, Chinua Achebe, Toni Morrison, August Wilson, Ama ata Aidoo, Samuel Beckett, Derek Walcott, John Pepper Clark, Albert Camus, Ngugi wa Thiong’o, George Bernard Shaw, Athol Fugard, Alex la Guma, Mariama Ba, and Sembene Ousmane–– Poet-Laureate & Prof. Eugene Redmond Tess Onwueme is a multiple award-winning author and eminent University Professor of Global Letters at the University of Wisconsin, USA. Her prestigious literary awards/honors include the Fonlon-Nichols award (2009), the Phyllis Wheatley/Nwapa award for distinguished black writers (2008), the Martin Luther King/Rosa Parks/Chavez Distinguished Authors Award (1989/90), the African Distinguished Authors Award (1988), and the extraordinary four-time prize of the Association of Nigerian Authors (ANA) Award in drama, among others. In 2007 the US State Department appointed her to the State Department Public Diplomacy Speaker/Specialist Program for North, East and West India with the mandate to make friends for America. In October 2014, she received the rare commendation with Declaration of a Proclamation in her honor by members of the Wisconsin State Senate/Legislature and the University of Wisconsin to mark the Tess Onwueme Archival Collection at the University of Wisconsin. The 2009 Tess International Conference, which was exclusively devoted to Tess Onwueme’s creative work, followed the prestigious Fonlon-Nichols award to her in Vermont, USA, in 2009. Her plays have featured in international academic and public stages in India, Sudan, Canada, the USA, the UK, Europe, the Caribbean, and throughout Africa. Summing up the author’s contributions to World Literature/Drama, Dr. Kanika Batra notes that “Onwueme’s creative works continue to influence and generate significant interest around the world, as they are widely produced/staged, studied, taught, and written about in scholarly books, dissertations, theses, book chapters, journal articles, and international media. Onwueme’s works have a wide range of social, political, historical, cultural and environmental concerns of the masses in the global community today, with emphasis on women, youth in continental Africa and the Diaspora." ––Among her acclaimed works is Shakara: Dance-Hall Queen…Through the voices of women, in Shakara and her other plays, Onwueme draws out universal themes of conflict…Described as the “Ibsen of her culture,” the playwright who dares to raise new issues, Onwueme uses the dramatic form to express an optimism for the future, for change and challenge to the repressive powers over people’s lives…–– Nina Adams 2004 BBC World Drama Service production/broadcast of SHAKARA. ––Tess Onwueme is one of the greatest living authors. We proudly present Onwueme’s play Shakara as a powerful drama with resonant topical enactment of the chronic problems of global poverty, hunger, inequality, of class and gender, unemployment and joblessness provoking youth apathy and violence ravaging the world––Sanal Edamaruku, President of Rationalist International, and former Producer /President of the International Khatakali Centre in New Delhi, India. _________________________________________________________________________________________________________________________________