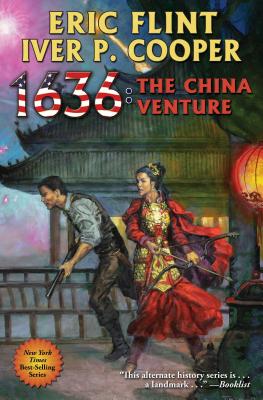 This is book number 27 in the Ring of Fire series.

The Ring of Fire Series Continues! The United States of Europe finds itself embroiled in international intrigue, as the uptimers attempt to establish an embassy in Ming Dynasty era China.

VENTURE TO SAVE AN EMPIRE

The newly formed United States of Europe sends an embassy to the Chinese Empire to open up trade talks for all-important, critical resources. Granted, they are ones no one has ever needed before, but that was before the town of Grantville, West Virginia showed up from 300 years in the future.

There’s even an ally to gain along the way: Zheng Zhilong is a former pirate, now an admiral for the Ming navy, and the head of a wealthy and powerful Fujian province trading family. More impressively, he has read the Grantville history books given to him by his Jesuit missionary connections. He knows the Ming dynasty is about to be hit with famine, bandit armies, and barbarian invaders. He is determined that his family will survive.

It may be too late. Official China is famously suspicious of foreigners. Can the up-timers and their friends persuade the mandarins to establish trade and diplomatic relations with the young United States of Europe? Their greatest asset is also their greatest curse: knowledge that China is due for decades of mass suffering and civil war. Changes must come, but changes also bring their own deadly consequences!


About 1636: Seas of Fortune by Iver Cooper:
". . . expand[s] the Ring of Fire universe into new or previously limited geography and culture. 'Stretching Out' includes seven excellent entries mostly in South America and the Caribbean built on real events but with a nice Grantville twist. 'Rising Sun' contains five terrific tales ... also built on real events enhanced by historical speculation but with a nice Grantville twist."—Alternate Worlds

Iver P. Cooper has been an active contributor to Eric Flint's Ring of Fire universe, with short stories and articles published in the online Grantville Gazette and in the hardcover anthology Ring of Fire II. He is the author of 1636: Seas of Fortune. Cooper is an intellectual property law attorney with Browdy & Neimark, Washington DC. He has received legal writing awards from the American Patent Law Association, the U.S. Trademark Association, and the American Society of Composers, Authors and Publishers, and is the sole author of Biotechnology and the Law, now in its twenty-something edition. In his spare time, he teaches swing and folk dancing, and participates in local photo club competitions. Cooper is married with a son and daughter.