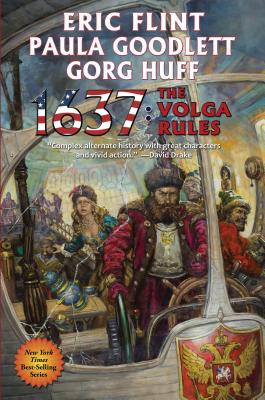 This is book number 25 in the Ring of Fire series.

It’s been five years since a cosmic incident known as The Ring of Fire transported the modern-day town of Grantville, West Virginia, through time and space to 17th-century Europe. The course of world history has been forever altered. And Mother Russia is no exception.

Czar Mikhail has escaped house arrest with the aid of up-time car mechanic Bernie Zeppi, his Russian associates—and a zeppelin. They head to the village of Ufa, where the czar plans to set up a government-in-exile. The path is dangerous, but if they are successful, a new wind of liberty will blow three centuries early—and change Mother Russia forever.

About 1636: The Kremlin Games:
“…a well-constructed plot filled with satisfying measures of comedy, romance, political intrigue, and action.”—Publishers Weekly