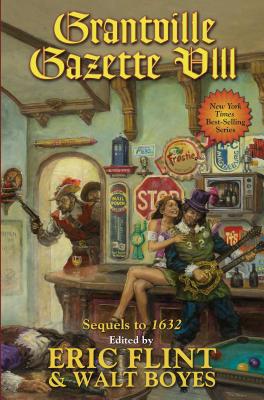 This is book number 8 in the The Ring of Fire series.

The most popular alternate history series of all continues. When an inexplicable cosmic disturbance hurls your town from twentieth century West Virginia back to seventeenth century Europe—and into the middle of the Thirty Years War—you'd better be adaptable to survive. And the natives of that time period, faced with American technology and politics, need to be equally adaptable. Here’s a generous helping of more stories of Grantville, the American town lost in time, and its impact on the people and societies of a tumultuous age.

Edited by Eric Flint and Walt Boyes, the editor of the Grantville Gazette magazine from which the best selections are made, these are stories that fill in the pieces of the Ring of Fire series begun with Flint’s novel 1632. The setting has become a political, economic, social and cultural puzzle as supporting characters we meet in the novels get their own lives, loves and life-changing stories. The future and democracy have arrived with a bang—an historical explosion with a multitude of unforeseen consequences.

“[Eric Flint] can entertain and edify in equal, and major, measure.”—Publishers Weekly
Eric Flint is a modern master of alternate history fiction, with 3 million books in print. He’s the author/creator of the multiple New York Times best-selling Ring of Fire series, starting with first novel 1632. With David Drake he has written six popular novels in the “Belisarius” alternate Roman history series, and with David Weber, he has collaborated on 1633 and 1634: The Baltic War, as well as four novels in Weber’s Honorverse series. Flint was for many years a labor union activist. He lives near Chicago, Illinois.

Walt Boyes is the editor of the Industrial Automation INSIDER magazine, the editor of The Grantville Gazette, a member of the 1632 universe editorial board, formerly editor of Control magazine and associate editor of Jim Baen's Universe. Along with Joy Ward, Walt is Co-Editor of Eric Flint's Ring of Fire Press. Walt is an active member of SFWA.