The Florentine Codex: An Encyclopedia of the Nahua World in Sixteenth-Century Mexico (Hardcover) 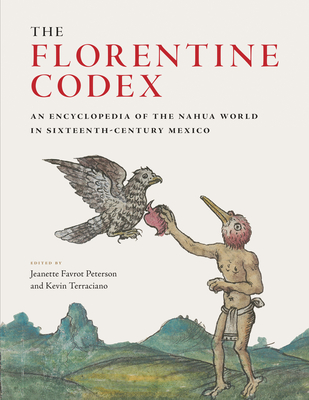 In the sixteenth century, the Franciscan friar Bernardino de Sahagún and a team of indigenous grammarians, scribes, and painters completed decades of work on an extraordinary encyclopedic project titled General History of the Things of New Spain, known as the Florentine Codex (1575–1577). Now housed in the Biblioteca Medicea Laurenziana in Florence and bound in three lavishly illustrated volumes, the codex is a remarkable product of cultural exchange in the early Americas.

In this edited volume, experts from multiple disciplines analyze the manuscript’s bilingual texts and more than 2,000 painted images and offer fascinating, new insights on its twelve books. The contributors examine the “three texts” of the codex—the original Nahuatl, its translation into Spanish, and its painted images. Together, these constitute complementary, as well as conflicting, voices of an extended dialogue that occurred in and around Mexico City. The volume chapters address a range of subjects, from Nahua sacred beliefs, moral discourse, and natural history to the Florentine artists’ models and the manuscript’s reception in Europe. The Florentine Codex ultimately yields new perspectives on the Nahua world several decades after the fall of the Aztec empire.

Jeanette Favrot Peterson is a research professor at the University of California, Santa Barbara, in the Department of History of Art and Architecture, focusing on Latin American visual culture. Her most recent book is Visualizing Guadalupe: From Black Madonna to Queen of the Americas. With Kevin Terraciano, she is among the cofounders of the Digital Florentine Project, a long-term initiative launched in 2017 by the Getty Research Institute.

Kevin Terraciano is a professor of history at the University of California, Los Angeles, specializing in colonial Latin America. He is the author of The Mixtecs of Colonial Oaxaca and many other writings on Mexico and Mesoamerica. Terraciano has won multiple awards for his publications, teaching, and graduate mentoring at UCLA.

[The Florentine Codex] offers fresh insights into the production and conceptualization of the manuscript, as well as the nuanced interchanges that occurred among its many collaborators...This book will directly appeal to those interested in sixteenth-century manuscripts of central Mexico and Nahua culture more generally. It will be an essential source for those working on the Florentine Codex.
— H-Net Reviews

[A] lavishly illustrated volume...This is a very engaging and useful compilation of essays that help to illuminate the Florentine Codex. It is essential for all scholars of the contact period in Mexico and will serve as a point of departure for much additional research.
— The Americas

The overall innovative quality of this volume is impressive. Above all, this important new book enhances our understanding of the Florentine Codex’s third text, its illustrations, which were clearly 'eloquent images' that gave Nahuatl and Spanish alphabetic texts their enduring power.
— Journal of Interdisciplinary History

The Florentine Codex provides a rich scholarly dialogue among the contributors. They commonly accept the alphabetic texts and images of the Florentine Codex as a bicultural product, but they differ in their approaches to the codex by emphasizing either indigenous or European tradition depending on their scholarly interest. Yet, their studies perfectly and harmoniously fit in the book by complementing one another. There is no doubt that this collection will serve as an important source for the scholars and students of pre-Hispanic and colonial Mexico for many years to come.
— Bulletin of Spanish Studies

This book is an important contribution to Sahaguntine studies in its collection of insightful essays by established scholars, including revised versions of some now-classic scholarship. The relatively succinct chapters are well suited for university instruction, for both core curricula and specialized courses. It is a beautifully illustrated volume that will appeal to anyone interested in the early modern humanities.
— Renaissance Quarterly

[A] rigorous, interdisciplinary, and engaging treatment of the most consequential manuscript on the Aztec or Nahua worlds…[The Florentine Codex] features contributions from exemplary specialists and is richly illustrated…superb.
— Hispanic American Historical Review

[The Florentine Codex] will be an important source for those interested in better understanding the Nahua world before and after Spanish arrival. The volume’s goal of emphasizing the Florentine Codex’s paintings is well-served by the abundant images that fill the essays, all of them in color...by looking closely at the codex and asking new questions of it, each of the authors brings a distinct perspective and special insights to their task, providing a strong foundation and model for future studies of the Florentine Codex and the Nahua world.
— American Historical Review

[A] lavishly illustrated edited volume…One thing that authors in the volume consistently do is pay close attention to both the Spanish and Nahuatl texts, always attentive to gaps and acts of translation—as well as censorship and resistance—between them... Even after all of the advances in this volume, there is still much more to learn about this fascinating document.
— Latin American & Latinx Visual Culture