How to Suppress Women's Writing (Paperback) 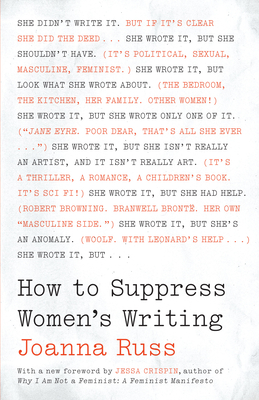 How to Suppress Women's Writing (Paperback)

Are women able to achieve anything they set their minds to? In How to Suppress Women’s Writing, award-winning novelist and scholar Joanna Russ lays bare the subtle—and not so subtle—strategies that society uses to ignore, condemn, or belittle women who produce literature. As relevant today as when it was first published in 1983, this book has motivated generations of readers with its powerful feminist critique.

“What is it going to take to break apart these rigidities? Russ’s book is a formidable attempt. It is angry without being self-righteous, it is thorough without being exhausting, and it is serious without being devoid of a sense of humor. But it was published over thirty years ago, in 1983, and there’s not an enormous difference between the world she describes and the world we inhabit.”
—Jessa Crispin, from the foreword

“A book of the most profound and original clarity. Like all clear-sighted people who look and see what has been much mystified and much lied about, Russ is quite excitingly subversive. The study of literature should never be the same again.”
—Marge Piercy

Hugo and Nebula award–winning author Joanna Russ (1937–2011) was a widely respected feminist science fiction writer best known for the novel The Female Man. She was also a professor of English at the University of Washington who published several collections of essays and literary criticism.

Jessa Crispin is the founder and editor of Bookslut.com. She is the author of The Dead Ladies Project and Why I Am Not a Feminist: A Feminist Manifesto.


Nearly four decades after she penned it, Joanna Russ’ How to Suppress Women’s Writing has just been reissued, and it’s as timely as ever. That’s the problem. The book is exhausting and wry and depressing, a deeply sourced journey through the misogyny of the making of the English literary canon. . . . I don’t need this book. Your son needs this book. Your uncle needs it. Your bartender needs it. Maybe you need it.
— Texas Observer

If you haven’t read this little book, you should seek it out: it’s still horribly relevant...Russ showed me we can’t sensibly talk about what is most important or of the highest quality without first asking who gets to decide, and based on what criteria?
— Emily Maguire