A Mind at Play: How Claude Shannon Invented the Information Age (Paperback) 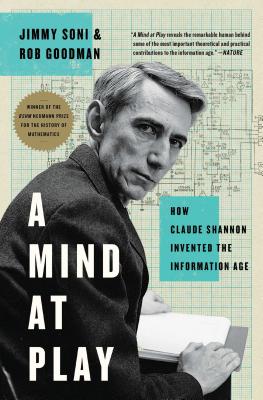 A Mind at Play: How Claude Shannon Invented the Information Age (Paperback)

"Soni and Goodman are at their best when they invoke the wonder an idea can instill. They summon the right level of awe while stopping short of hyperbole." —Financial Times

"Jimmy Soni and Rob Goodman make a convincing case for their subtitle while reminding us that Shannon never made this claim himself." —The Wall Street Journal

“A charming account of one of the twentieth century’s most distinguished scientists…Readers will enjoy this portrait of a modern-day Da Vinci.” —Fortune

In their second collaboration, biographers Jimmy Soni and Rob Goodman present the story of Claude Shannon—one of the foremost intellects of the twentieth century and the architect of the Information Age, whose insights stand behind every computer built, email sent, video streamed, and webpage loaded. Claude Shannon was a groundbreaking polymath, a brilliant tinkerer, and a digital pioneer. He constructed the first wearable computer, outfoxed Vegas casinos, and built juggling robots. He also wrote the seminal text of the digital revolution, which has been called “the Magna Carta of the Information Age.” In this elegantly written, exhaustively researched biography, Soni and Goodman reveal Claude Shannon’s full story for the first time. With unique access to Shannon’s family and friends, A Mind at Play brings this singular innovator and always playful genius to life.
Jimmy Soni is an award-winning author. His newest book, The Founders: The Story of PayPal and the Entrepreneurs Who Shaped Silicon Valley, was a national bestseller and received critical acclaim from The New York Times, Wall Street Journal, New Yorker, The Economist, Financial Times, and more. His previous book, A Mind at Play: How Claude Shannon Invented the Information Age, won the 2017 Neumann Prize, awarded by the British Society for the History of Mathematics for the best book on the history of mathematics for a general audience, and the 2019 Middleton Prize by the Institute of Electrical and Electronics Engineers. He lives in Brooklyn, New York, with his daughter, Venice.

Dr. Rob Goodman is assistant professor at Toronto Metropolitan University in politics and public administration. His scholarly work has appeared in History of Political Thought, the Kennedy Institute of Ethics Journal, and The Journal of Medicine and Philosophy. With Jimmy Soni, he is the coauthor of Rome’s Last Citizen: The Life and Legacy of Cato, Mortal Enemy of Caesar, and A Mind at Play: How Claude Shannon Invented the Information Age. His most recent book, Words on Fire, offers a powerful critique of today’s political language. Before entering academia, he was a congressional speechwriter. He has also written for Slate, The Atlantic, Politico, and Scientific American.