Red Notice: A True Story of High Finance, Murder, and One Man's Fight for Justice (Hardcover) 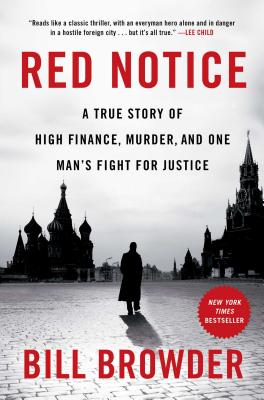 A real-life political thriller about an American financier in the Wild East of Russia, the murder of his principled young tax attorney, and his dangerous mission to expose the Kremlin’s corruption.

Bill Browder’s journey started on the South Side of Chicago and moved through Stanford Business School to the dog-eat-dog world of hedge fund investing in the 1990s. It continued in Moscow, where Browder made his fortune heading the largest investment fund in Russia after the Soviet Union’s collapse. But when he exposed the corrupt oligarchs who were robbing the companies in which he was investing, Vladimir Putin turned on him and, in 2005, had him expelled from Russia.

In 2007, a group of law enforcement officers raided Browder’s offices in Moscow and stole $230 million of taxes that his fund’s companies had paid to the Russian government. Browder’s attorney Sergei Magnitsky investigated the incident and uncovered a sprawling criminal enterprise. A month after Sergei testified against the officials involved, he was arrested and thrown into pre-trial detention, where he was tortured for a year. On November 16, 2009, he was led to an isolation chamber, handcuffed to a bedrail, and beaten to death by eight guards in full riot gear.

Browder glimpsed the heart of darkness, and it transformed his life: he embarked on an unrelenting quest for justice in Sergei’s name, exposing the towering cover-up that leads right up to Putin. A financial caper, a crime thriller, and a political crusade, Red Notice is the story of one man taking on overpowering odds to change the world.

Bill Browder, founder and CEO of Hermitage Capital Management, was the largest foreign investor in Russia until 2005. Since 2009, when his lawyer, Sergei Magnitsky, was murdered in prison after uncovering a $230 million fraud committed by Russian government officials, Browder has been leading a campaign to expose Russia’s endemic corruption and human rights abuses. Before founding Hermitage, Browder was vice president at Salomon Brothers. He holds a BA in economics from the University of Chicago and an MBA from Stanford Business School.

“Reads like a classic thriller, with an everyman hero alone and in danger in a hostile foreign city . . . but it’s all true.”
— Lee Child, bestselling author of the Jack Reacher series

"The first half of Red Notice traces Browder’s improbable journey from prep-school washout through college, business school, and a series of consulting and Wall Street jobs before becoming Russia’s largest foreign investor....This book-within-a-book does for investing in Russia and the former Soviet Union what Liar’s Poker did for our understanding of Salomon Brothers, Wall Street, and the mortgage-backed securities business in the 1980s. Browder’s business saga meshes well with the story of corruption and murder in Vladimir Putin’s Russia, making Red Notice an early candidate for any list of the year’s best books."
— Norman Pearlstine

"The story of Sergei Magnitsky's life and death is a shocking true-life thriller, and Bill Browder was the man to write it."
— Tom Stoppard

“In Red Notice, Bill Browder tells the harrowing and inspiring story of how his fight for justice in Russia made him an unlikely international human rights leader and Vladimir Putin's number-one enemy. It is the book for anyone interested in understanding the culture of corruption and impunity in Putin's Russia today, and Browder’s heroic example of how to fight back.”
— Senator John McCain

"This book reads like a thriller, but it's a true, important, and inspiring real story. Bill Browder is an amazing moral crusader, and his book is a must-read for anyone who seeks to understand Russia, Putin, or the challenges of doing business in the world today."
— Walter Isaacson, author of Steve Jobs and The Innovators

"A fascinating and unexpected story."
— Mitch Albom, author of Tuesdays with Morrie

"Browder’s true story is a heart-in-your-throat page turner, and the only close-up look I know of what it’s like to take on Putin. It is also a moving account of a man who found his calling, and ended up winning in the end."
— Bryan Burrough, co-author of Barbarians at the Gate and author of Public Enemies and The Big Rich

"A fascinating, heart-stopping account of how to take on Putin--and win. It's exciting to read about Browder's roller-coaster ride to wealth in Russia, and to learn how his compassion for Sergei Magnitsky, his murdered lawyer, inspired his memorable struggle against the venal apparatchiks of a corrupt state. This is the gripping--and absolutely true--story behind the Magnitsky Law, a signal advance in human rights."
— Geoffrey Robertson, human rights lawyer and author of Crimes Against Humanity: The Struggle For Global Justice

"This indispensable look at the brutal realities of the Putin regime is of even greater relevance thanks to Bill Browder’s unique expertise and personal experience inside the belly of the beast.”
— Garry Kasparov, Chess Grandmaster and author of How Life Imitates Chess

"Bill Browder has become one of the most sincerely hated men in the Kremlin over the years--and that is something to be incredibly proud of. . . . This book shows the difference that one person can make when they refuse to back down, as told by a fellow soldier in the battle to hold Putin to account."
— Nadya Tolokonnikova and Masha Alekhina, members of Pussy Riot

"Browder’s narrative lays out in vivid detail the often murky mechanisms of Russia’s kleptocratic economy, culminating in an engrossing account of what would surely be the heist of the century were it not so representative of business as usual.  It’s also a chilling, sinister portrait of a society in which the rule of law has been destroyed by those sworn to enforce it.  The result is an alternately harrowing and inspiring saga of appalling crime and undeserved punishment in the Wild East."
— Publishers Weekly (starred review)

“An almost unbelievable tale . . . well-paced, heartfelt . . . It may be that ‘Russian stories never have happy endings,’ but Browder's account more than compensates by ferociously unmasking Putin's thugocracy.”
— Kirkus Reviews

"[Browder's] freewheeling, snappy book describes the meteoric rise, and disastrous fall, of a buccaneer capitalist who crossed the wrong people and paid a steep price. . . The high stakes make for a zesty tale."
— New York Times

“[A] riveting account of Browder’s journey through the early years of Russian capitalism….Begins as a bildungsroman and ends as Greek tragedy…. ‘Russian stories never have happy endings,’ Magnitsky tells Browder, in the book’s most memorable line. Perhaps not, but they do have inspiring ones.”
— The Washington Post

“In his new book, Red Notice: A True Story of High Finance, Murder, and One Man’s Fight for Justice, Bill Browder writes the way he talks—which is always a good strategy. His autobiography is bracing, direct and honest, with only a little less swearing than you encounter in person. It is both a political thriller and an argument for morality in foreign policy that he could never have expected to make when he began his roaring career in finance.”
— The Daily Beast

“Bill Browder, the unexpected hero and author of this suspenseful memoir, is no ordinary investment banker. . . . It is fascinating to follow him as he navigates the kleptocratic Russian economy. . . Most of the story is about finance, revolving around things like valuation anomalies and share dilutions, and all of it comes surprisingly alive."
— Boston Globe

"I don’t know anything about investment banking except what Browder has taught me in Red Notice, yet as a reader I was fully engaged by the book’s monumental presentation of the risks, rewards, and personal and financial dangers of doing business in Russia....An unusually affecting book...What Browder says he intends to do now is to 'carry on creating a legacy for Sergei [Magnitsky] and pursuing justice for his family.' A book as resounding as Red Notice may be a step in that direction."
— Christian Science Monitor

“An impassioned personal broadside against the Kremlin.”
— Financial Times

“A sizzling account of Mr. Browder’s rise, fall and metamorphosis from bombastic financier to renowned human-rights activist."
— The Economist (UK)

"Rattling through the high-finance world of New York and London, and then on to the seedier side of life in Moscow, Red Notice sometimes stretches credulity. But just as Browder really is a hedge fund manager turned human rights activist, so this story of courage combined with a dash of obsessiveness is about the real here and now. . . . He reminds us that heroism sometimes lies in unlikely places. Browder deserves our respect."
— The Independent (UK)

“An unrelenting parable of how Russia’s rulers cheat and harm their citizens…a very Russian tale, as well as an important one.”
— The Spectator (UK)

“A fascinating exposé.”
— The Guardian (UK)

"A tale that makes the dirty dealings of House of Cards look like Snow White."
— The Toronto Star

“Riveting…Browder’s story of investing bravado turns into a thriller as compelling as any John le Carré spy novel.”
— Institutional Investor

“Browder's book is, to my knowledge, the first unveiling of the intrinsically mafia-like nature of Putinism in all its breathtaking scope and horror.”
— The Huffington Post

“Red Notice is a dramatic, moving and thriller-like account of how Magnitsky’s death transformed Browder from hedge-fund manager to global human rights crusader.”
— The Guardian (US edition)