Unbreakable: My Story, My Way (Paperback) 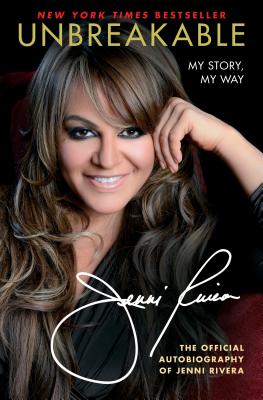 The story behind Telemundo’s Jenni Rivera: Mariposa del Barrio series, now streaming. A New York Times bestseller, this is the official biography from the beloved Mexican-American singer who lost her life in a tragic plane crash.

The only autobiography authorized by Jenni Rivera

These are the last words that beloved Mexican American singer Jenni Rivera spoke publicly before boarding the plane that would crash and cut her life short on December 9, 2012. However, they are not the final words that La Diva de la Banda had for the world. Those are found in the pages you hold in your hands, Jenni’s own account of the highs and lows of her extraordinary journey.

She became the most acclaimed Spanish-language singer in the United States and sold more than 15 million records worldwide. A single mother of five and grandmother of two, she was also an actress, a television producer, the star of her own reality show, and an entrepreneur. But for all its immense success, Jenni’s life often seemed to be a series of personal battles in which perseverance was her only weapon. As her fame grew, she made it her mission to speak about her struggles, forging an intimate connection with her fans. She became a figure of strength and a source of encouragement to women of all ages.

In Unbreakable, Jenni recounts the crucial moments in her past, revealing her experiences with domestic and sexual abuse, divorce, body image issues, making her way in a male-dominated industry, raising her children as a single mother, and learning that she could depend only on herself.

Though she is no longer with us, Jenni will always be the "Rivera rebel from Long Beach," the girl who maintained her sense of humor and fighting spirit in every circumstance. In this remarkable memoir, Jenni leaves behind a legacy of inspiration and determination that will forever live on through her precious family, friends, and fans.

Winner of fifteen gold records, fifteen platinum records, and five double platinum records, with more than fifteen million records sold in all, Jenni Rivera (1969 – 2012) was one of her or any generation’s most popular and in-demand artists, not only in Mexico but also in the United States, selling out performances at such prestigious venues as the Staples Center, the Kodak Theatre, the Nokia Theatre, the Gibson Amphitheatre. In Mexico, she held a sellout performance at the Auditorio Nacional and performed a concert for 80,000 people in Querétaro. Jenni was also one of the decade’s most award-winning artists. In 2009, she earned a record-breaking eleven Billboard Award nominations, becoming the first female regional Mexican performer to be so honored.