The Wind Through the Keyhole: A Dark Tower Novel (The Dark Tower) (Large Print / Hardcover) 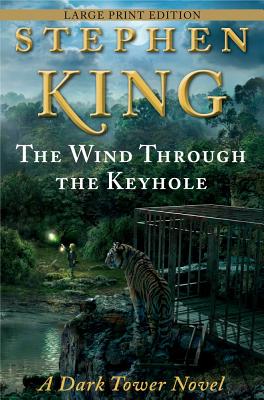 The Wind Through the Keyhole: A Dark Tower Novel (The Dark Tower) (Large Print / Hardcover)

This is book number 4 in the The Dark Tower series.

In his New York Times bestselling The Wind Through the Keyhole, Stephen King returns to the spectacular territory of the Dark Tower fantasy saga to tell a story about gunslinger Roland Deschain in his early days.

The Wind Through the Keyhole is a sparkling contribution to the series that can be placed between Dark Tower IV and Dark Tower V. This Russian doll of a novel, a story within a story within a story, visits Roland and his ka-tet as a ferocious, frigid storm halts their progress along the Path of the Beam. Roland tells a tale from his early days as a gunslinger, in the guilt-ridden year following his mother’s death. Sent by his father to investigate evidence of a murderous shape-shifter, Roland takes charge of Bill Streeter, a brave but terrified boy who is the sole surviving witness to the beast’s most recent slaughter. Roland, himself only a teenager, calms the boy by reciting a story from the Book of Eld that his mother used to read to him at bedtime, “The Wind through the Keyhole.” “A person’s never too old for stories,” he says to Bill. “Man and boy, girl and woman, we live for them.”

And stories like The Wind Through the Keyhole live for us with Stephen King’s fantastical magic that “creates the kind of fully imagined fictional landscapes a reader can inhabit for days at a stretch” (The Washington Post).
Stephen King is the author of more than sixty books, all of them worldwide bestsellers. His recent work includes Fairy Tale, Billy Summers, If It Bleeds, The Institute, Elevation, The Outsider, Sleeping Beauties (cowritten with his son Owen King), and the Bill Hodges trilogy: End of Watch, Finders Keepers, and Mr. Mercedes (an Edgar Award winner for Best Novel and a television series streaming on Peacock). His novel 11/22/63 was named a top ten book of 2011 by The New York Times Book Review and won the Los Angeles Times Book Prize for Mystery/Thriller. His epic works The Dark Tower, It, Pet Sematary, Doctor Sleep, and Firestarter are the basis for major motion pictures, with It now the highest-grossing horror film of all time. He is the recipient of the 2020 Audio Publishers Association Lifetime Achievement Award, the 2018 PEN America Literary Service Award, the 2014 National Medal of Arts, and the 2003 National Book Foundation Medal for Distinguished Contribution to American Letters. He lives in Bangor, Maine, with his wife, novelist Tabitha King.