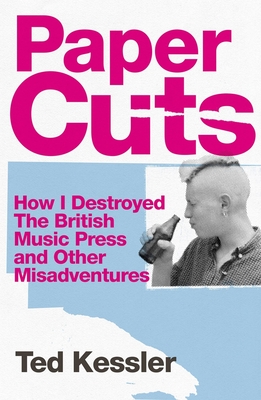 PAPER CUTS is the inside story of the slow death of the British music press. But it's also a love letter to it, the tale of how music magazines saved one man's life. Ted Kessler left home and school around his seventeenth birthday, determined 'to be someone who listened to music professionally'. That dream appeared forlorn when he was later arrested for theft behind the counter of the record shop he managed during acid house's long hot summer of love. Paper Cuts tells how Kessler found redemption through music and writing and takes us on a journey alongside the stars he interviewed and the work-place dramas he navigated as a senior staffer at NME through the boom-time '90s and on to the monthly Q in 2004, where he worked for sixteen years before it folded with him at its helm as editor in 2020.

We travel in time alongside musical heroes Paul Weller, Kevin Rowland, Mark E Smith, and to Cuba twice, first with Shaun Ryder and Bez, then with Manic Street Preachers. We spend long, mad nights out with Oasis and The Strokes, quality time with Jeff Buckley and Florence Welch, and watch Radiohead deliver cold revenge upon Kessler in public. A story about love and death, about what it's like when a music writer shacks up with a conflict of interest, and what happens when your younger brother starts appearing on the cover of the magazines you work for, this is the memoir of "a delinquent doofus" whose life was both rescued and defined by music magazines.

Ted Kessler was on the staff at NME as a writer and editor between 1993 and 2003, before joining Q magazine's staff, working there for 16 years. He was Q's editor for four years, until it closed in 2020. He also devised and edited the acclaimed MY OLD MAN: TALES OF OUR FATHERS, published in 2016 by Canongate.
Paper Cuts is a wonderfully funny and moving book about a life devoted to music and music magazines. With all the ensuing chaos that that creates. And the heartbreak and salvation of a life lived in song. Artists notoriously have a fractious relationship with music journalists. Hate them even. But I was always happy to see Ted—Florence Welch

I love how Ted writes: incisive, relatable, funny and sad but shot through with optimism and wise good humour. I'm maybe the perfect audience for his memoir, since I've been harassed in public for having a stupid haircut, experienced the ridiculousness of the interview set-up and also worked in the sitcom-silly world of magazine publishing myself. But it's also a great document of a time when you could find an entry into music journalism with just raw talent and enthusiasm, headed nowhere and having fucked up your life before it's properly begun. Why writing about music could often be a brilliant job, despite the humiliations and disappointments, the pressures and frustrations, and what happens when the twats eventually take over. Ted's encounters with famous names show both sides' vulnerabilities without any bullshit point-scoring ego getting in the way of the story. Which is rare for a music journalist, and what makes him a rare gem—Miki Berenyi

The world I once inhabited - the world of print, vinyl and face-to-face interviews - vanished in a blast of broadband. It happened so quickly and so silently I almost forget that world had ever existed. Ted Kessler's restless eye for detail conjures it back to boozy, smoky, noisy life. Then he turns it all around and points it into the future. Not just a good book, but an important one—Frank Cottrell-Boyce, bestselling author and screenwriter

Ted Kessler is one of the last great swashbuckling music journalists and this account of the crazy boom years to the slow collapse of the print press is fascinating. He is from the from a similar broad minded nest of Bohemians that I was forged and those lines about his upbringing resonated the most. A masterclass of effortless writing about something he genuinely loves—Baxter Dury

Paper Cuts is a rollicking good read. A searingly honest self-appraisal that charts Kessler's turbulent formative years, before hurtling forward into a morass of drugs, dysfunction, dead end jobs, under-achievement and, eventually, petty larceny. There are two rich seams that run through Kessler's life however; the love of music and his innate talent as a writer (and editor). Those talents, and his ability to survive adversity and hardship, are vividly highlighted in this most entertaining book—Jah Wobble

Ted Kessler and all the music writer crew that cut their teeth under indie's golden age are as much the songs from that era as the songs themselves. Paper Cuts humanises Ted and his peers whilst taking you back to the largely unsurpassed musical utopia of a late 1980's England. I always thought Ted was posh: clearly not. From disgraced Till Dipper to the gobbyist music writer I know, I found so many parallels with this story. It's really, really good—Jason Williamson, Sleaford Mods

This is such a brilliantly absorbing and entertaining book about the joys of a life lived in music. As good a left-field guide to the last few decades of alternative pop as you'll find, too. A special book by one of the very best music writers—Felix White, author of It's Always Summer Somewhere

For 30 years Ted Kessler was in the music press's front row. His hair-raisingly honest, helter-skelter memoir tells you how it all went wrong and why it was worth it anyway. Paper Cutsmoves like a great band biography - struggle, triumph, chaos, collapse - only the band is the British music press—Dorian Lynskey, author of The Ministry of Truth and 33 Revolutions Per Minute

From unemployable petty criminal with 'low morals' and a fright-wig, to NME staffer barrelling through the 90s, to editor of the good ship Q (with an iceberg on the horizon), Paper Cuts is a rollicking, deftly-told inside story: of how music can save your life, how magazines really work, how mad The Stars are and how big-wigs ruin everything.Compelling, passionate, bracingly honest, Kessler takes aim at...mostly himself—Sylvia Patterson, author of I’m Not With The Band