The Edinburgh Companion to Modernism, Myth and Religion (Hardcover) 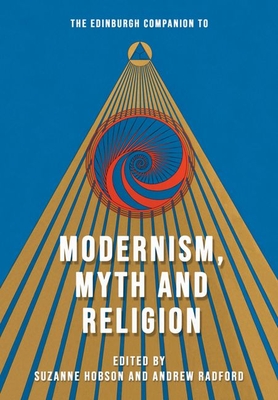 The Edinburgh Companion to Modernism, Myth and Religion (Hardcover)

Until fairly recently, the 'Authorized Version' of cultural modernism stated that the secularizing trends of liberal modernity - and the resultant emphasis on irony, parody and dissolution in modernist artforms - had pushed religion to the edges of early twentieth-century culture. This Companion complicates this 'Authorized Version' by furnishing students and academic researchers with more nuanced and probing assessments of the intersections - and tensions - between religion, myth and creativity during this half century of geopolitical ferment. The Companion addresses the variety and specificity of modernist spiritualities; as well as the intricately textured and shifting standpoints that modernist figures have occupied in relation to theological traditions, practices, creeds, and institutions. What emerges is a multi-textured account of modernism's deep-rooted concern with the historical and established forms of religion as well as new engagements with 'occulture' and indigenous traditions. In short, this Companion supplies a lively and original introduction to the aesthetic, publishing, technological and philosophical trends that shape debates about spirituality, community and self from the 1890s to the 1940s and beyond.

Suzanne Hobson is Reader in 20th Century Literature in the English Department at Queen Mary University of London. Her research focuses on modernism and literary theory and she is especially interested in questions of religion and secularism in the first half of the 20th century. She is the author of Unbelief in Interwar Literary Culture: Doubting Moderns (Oxford University Press 2022) and Angels of Modernism: Religion, Culture, Aesthetics 1910-60 (Palgrave Macmillan 2011) and co-editor of The Salt Companion to Mina Loy (2010). She is past Chair of the British Association for Modernist Studies and co-organizer of the London Modernism Seminar. Andrew Radford is Senior Lecturer in 20th Century Literature in the College of Arts at the University of Glasgow. His research focuses primarily on the occult writings of understudied female authors from the interwar period. He has recently published a critical edition of Marie Corelli's occult bestseller A Romance of Two Worlds (Edinburgh University Press 2019). He is the co-editor of British Experimental Women's Fiction, 1945-1975: Slipping Through the Labels (Palgrave Macmillan 2021), The Occult Imagination in Britain 1875-1947 (Routledge 2018), Modernist Women Writers and Spirituality: A Piercing Darkness (Palgrave Macmillan 2016), and Franco-British Cultural Exchanges, 1880-1940: Channel Packets (Palgrave Macmillan 2012).