Slaves and Highlanders: Silenced Histories of Scotland and the Caribbean (Paperback) 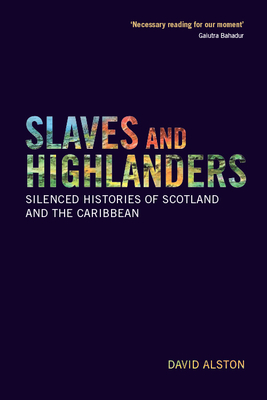 Slaves and Highlanders: Silenced Histories of Scotland and the Caribbean (Paperback)

Scots were involved in every stage of the slave trade: from captaining slaving ships to auctioning captured Africans in the colonies and hunting down those who escaped from bondage. This book focuses on the Scottish Highlanders who engaged in or benefitted from these crimes against humanity in the Caribbean Islands and Guyana, some reluctantly but many with enthusiasm and without remorse. Their voices are clearly heard in the archives, while in the same sources their victims' stories are silenced - reduced to numbers and listed as property.

David Alston gives voice not only to these Scots but to enslaved Africans and their descendants - to those who reclaimed their freedom, to free women of colour, to the Black Caribs of St Vincent, to house servants, and to children of mixed race who found themselves in the increasingly racist society of Britain in the mid-1800s.

As Scots recover and grapple with their past, this vital history lays bare the enormous wealth generated in the Highlands by slavery and emancipation compensation schemes. This legacy, entwined with so many of our contemporary institutions, must be reckoned with.

David Alston is a Historian and Independent Researcher. He is the author of Ross & Cromarty: A Historical Guide (1997) and My Little Town of Cromarty: The History of a Northern Scottish Town (2006). He was a Highland Councillor and from 1991-2003 was curator/manager of Cromarty Courthouse Museum. He has published articles on the Highlands and Slavery including 'Very Rapid and Splendid Fortunes: Highland Scots in Berbice (Guyana) in the early nineteenth century', in Transactions of the Gaelic Society of Inverness, (2007) and wrote a chapter in the T.D. Devine edited collection 'Recovering Scotland's Slavery Past' (EUP, 2015). Juanita Cox-Westmaas completed her PhD in Caribbean Studies with a focus on Edgar Mittelholzer (1909-1965) and the Shaping of his Novels, at the University of Birmingham in 2013. She is editor of Creole Chips and Other Writings (2018). Other publications include Buried in the Landscape: Edgar Mittelholzer's Creative Gene(sis)/Geni(us), and Revolting Subtexts in Aje, L., Lacroix, T. and Misrahi-Barak, J. (eds) Re-imagining the Guyanas (2019) and introductions to republished Peepal Tree editions of Mittelholzer's Corentyne Thunder (2009) and The Life and Death of Sylvia (2010). She was Research Fellow on the project National, Identity and Belonging: An Oral History of the Windrush Generation and their Relationship to the British State (1948-2018) and is currently a Visiting Fellow. Rod Westmaas has carried out independent research into the history of Guyana in archives situated in Guyana and at The National Archives (Kew) and has spoken about his findings at academic and public events, and his experiences of migration and sense of national identity.