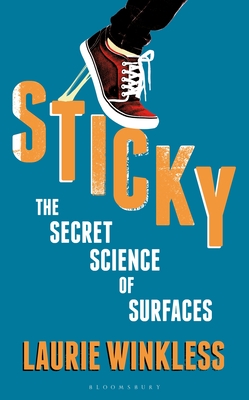 An exploration of the amazing world of surface science from the author of Science and the City.

You are surrounded by stickiness. With every step you take, air molecules cling to you and slow you down; the effect is harder to ignore in water. When you hit the road, whether powered by pedal or engine, you rely on grip to keep you safe. The Post-it note and glue in your desk drawer. The non-stick pan on your stove. The fingerprints linked to your identity. The rumbling of the Earth deep beneath your feet, and the ice that transforms waterways each winter. All of these things are controlled by tiny forces that operate on and between surfaces, with friction playing the leading role.

In Sticky, Laurie Winkless explores some of the ways that friction shapes both the manufactured and natural worlds, and describes how our understanding of surface science has given us an ability to manipulate stickiness, down to the level of a single atom. But this apparent success doesn't tell the whole story. Each time humanity has pushed the boundaries of science and engineering, we've discovered that friction still has a few surprises up its sleeve.

So do we really understand this force? Can we say with certainty that we know how a gecko climbs, what's behind our sense of touch, or why golf balls, boats and aircraft move as they do? Join Laurie as she seeks out the answers from experts scattered across the globe, uncovering a stack of scientific mysteries along the way.

Laurie Winkless is an Irish physicist-turned-science-writer, currently based in New Zealand. After her post-grad, she joined the UK's National Physical Laboratory as a research scientist, where she specialised in functional materials.

She is an experienced science communicator, who loves talking about science in all forms of media. Since leaving the lab, Laurie has worked with scientific organisations, engineering companies, universities, and astronauts, amongst others. Her writing has featured in outlets including Forbes, Wired, Esquire, and The Economist, and her first book, Science and the City, was published by Bloomsbury Sigma in 2016. This was followed by STICKY, her exploration of friction and surface science, in 2021.

“I am in awe of Laurie Winkless: of her ability to take something as seemingly plain as a tire, as overlooked as the dimples on a golf ball, and produce from it a surprising, fascinating narrative, one that effortlessly reveals the astonishing science of the world around us.” - Mary Roach, author of Stiff and Fuzz

“An absolutely wild ride ... bright and interesting. [Sticky] is a book for the 2020s ... truly great popular science for anyone who wants to know more about how we interact with our world -- young or old, beginner or experienced scientist.” - Nature

“A beautifully-written, utterly fascinating book that had me glued throughout. Like the very best science writing, Sticky helps you see the world from a different perspective. I couldn't recommend it more.” - Angela Saini, science journalist and author

“If you’ve ever wondered why some glues work better than others, or been puzzled why there are so many different types of car tire, or been amazed at the ease in which a gecko can run up the wall, then this wonderful book is for you.” - Mark Miodownik, author of Stuff Matters

“The excellence of [Sticky] shines through. Stickiness may not be something that we often think of as a science issue, but Winkless both shows how interesting it can be, and also how much there is still to learn in this topic that affects all our everyday lives.” - Brian Clegg, PopScienceBooks

“An enthusiastic exploration of how surfaces interact.” - Nature