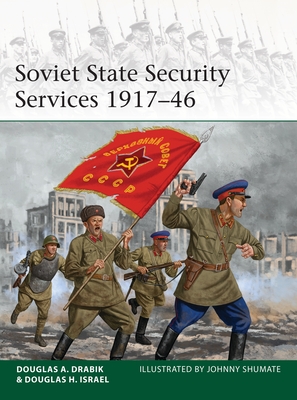 Featuring specially commissioned artwork, this study breaks new ground in covering all the uniformed Soviet security organizations from the Russian Revolution through to World War II.

The Bolsheviks' seizure of power in Russia in late 1917 was swiftly followed by the establishment of the Cheka, the secret police of the new Soviet state. The Cheka was central to the Bolsheviks' elimination of political dissent during the Russian Civil War (1917–22). In 1922 the Soviet state-security organs became the GPU and then the OGPU (1923–34) before coalescing into the NKVD. After it played a central role in the Great Terror (1936–38), which saw the widespread repression of many different groups and the imprisonment and execution of prominent figures, the NKVD had its heyday during the Great Patriotic War (1941–45). During the conflict the organization deployed full military divisions, frontier troop units and internal security forces and ran the hated Gulag forced-labor camp system. By 1946, the power of the NKVD was so great that even Stalin saw it as a threat and it was broken up into multiple organizations, notably the MVD and the MGB – the forerunners of the KGB. In this book, the history and organization of these feared organizations are assessed, accompanied by photographs and color artwork depicting their evolving appearance.

Johnny Shumate works as a freelance illustrator living in Nashville, Tennessee. He began his career in 1987 after graduating from Austin Peay State University. Most of his work is rendered in Adobe Photoshop using a Cintiq monitor. His greatest influences are Angus McBride, Don Troiani, and Édouard Detaille.