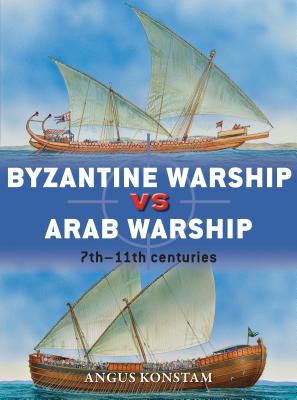 This engaging study pits the the Byzantine dromon against the Arabic shalandi in the prolonged struggle for mastery in the Mediterranean in the four centuries after 630 AD.

For four hundred years the Byzantine Empire's naval forces vied with the warships of the Islamic world for mastery of the Mediterranean. At the heart of this confrontation were the fighting vessels of the two powers, the Byzantine dromon and the Arabic shalandi, both oared warships. In those four centuries of warfare between two major maritime powers, both the Byzantines and the Arabs left us records of their doctrine and tactics, as well as of how their ships were built. Featuring full-colour artwork and rigorous analysis from an authority on naval warfare, this enthralling book offers a glimpse of the long-lost world of war at sea in the age of Byzantium.

Angus Konstam hails from the Orkney Islands, and is the author of over 50 books, the majority of which are published by Osprey. A former naval officer and museum professional, he worked as the Curator of Weapons at the Tower of London and as the Chief Curator of the Mel Fisher Maritime Museum in Key West, Florida. He now works as a full-time author and historian, and lives in Scotland. The author lives in Scotland.