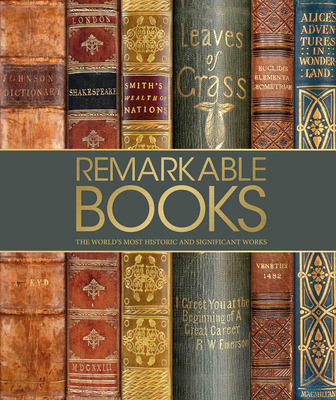 
Usually Ships in 1-5 Days
Imagine a world without Principia Mathematica, Rights of Man, the Bible, Shakespeare, or the Mahabharata.

Remarkable Books features 75 of the world’s most momentous titles – from The Art of War to Anne Frank’s Diary – and reveals their far-ranging impact.

Books are the medium through which scientists, storytellers, and philosophers introduce their ideas. Discover seminal religious and political titles, cornerstones of science such as On the Origin of Species, and ancient texts such as the I Ching, which is still used today to answer fundamental questions about human existence.

Get up close to see fascinating details, such as Vesalius’ exquisite anatomical illustrations in Epitome, Leonardo da Vinci’s annotated notebooks, or the hand-decorated pages in the Gutenberg Bible. Discover why Euclid’s Elements of Geometry was the most influential maths title ever published, and marvel at rare treasures such as the Aubin Codex, which tells the history of the Aztecs and the early Spanish colonial period in Mexico.

Michael Collins is a native of Ireland and studied theology at the University College Dublin. He has taught in a number of universities, including the American University of Rome; John Cabot University; and Duquesne University, Rome Campus, and he currently serves in St. Mary's Church in Dublin. Michael Collins has authored many books, including DK's The Vatican and Pope Francis: A Photographic Story of the People's Pope, and has been featured on CBS News's 60 Minutes.