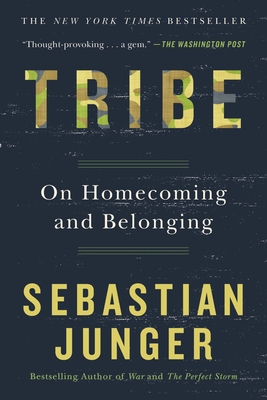 
Usually Ships in 1-5 Days
We have a strong instinct to belong to small groups defined by clear purpose and understanding--"tribes." This tribal connection has been largely lost in modern society, but regaining it may be the key to our psychological survival.

Decades before the American Revolution, Benjamin Franklin lamented that English settlers were constantly fleeing over to the Indians-but Indians almost never did the same. Tribal society has been exerting an almost gravitational pull on Westerners for hundreds of years, and the reason lies deep in our evolutionary past as a communal species. The most recent example of that attraction is combat veterans who come home to find themselves missing the incredibly intimate bonds of platoon life. The loss of closeness that comes at the end of deployment may explain the high rates of post-traumatic stress disorder suffered by military veterans today.

Combining history, psychology, and anthropology, Tribe explores what we can learn from tribal societies about loyalty, belonging, and the eternal human quest for meaning. It explains the irony that-for many veterans as well as civilians-war feels better than peace, adversity can turn out to be a blessing, and disasters are sometimes remembered more fondly than weddings or tropical vacations. Tribe explains why we are stronger when we come together, and how that can be achieved even in today's divided world.
Sebastian Junger is the New York Times bestselling author of The Perfect Storm and A Death in Belmont. He is a contributing editor to Vanity Fair, and has been awarded a National Magazine Award and an SAIS Novartis Prize for journalism. He lives in New York City.

"Junger has raised one of the most provocative ideas of this campaign season--and accidentally written one of its most intriguing political books."—The New York Times

"There are three excellent reasons to read Sebastian Junger's new book: the clarity of his thought, the elegance of his prose, and the provocativeness of his chosen subject. Within a compact space, the sheer range of his inquiry is astounding."—S. C. Gwynne, New York Times bestselling author of Rebel Yell and Empire of the Summer Moon

"Sebastian Junger has turned the multifaceted problem of returning veterans on its head. It's not so much about what's wrong with the veterans, but what's wrong with us. If we made the changes suggested in TRIBE, not only our returning veterans, but all of us, would be happier and healthier. Please read this book."—Karl Marlantes, New York Times bestselling author of Matterhorn and What It Is Like to Go to War

"Junger uses every word in this slim volume to make a passionate, compelling case for a more egalitarian society."—Booklist

"The author resists the temptation to glorify war as the solution to a nation's mental ills and warns against the tendency "to romanticize Indian life," but he does succeed in showing "the complicated blessings of 'civilization,' " while issuing warnings about divisiveness and selfishness that should resonate in an election year. The themes implicit in the author's bestsellers are explicit in this slim yet illuminating volume."—Kirkus Reviews

"TRIBE is an important wake-up call. Let's hope we don't sleep through the alarm."—Minneapolis Star Tribune

"Compelling...Junger...offers a starting point for mending some of the toxic divisiveness rampant in our current political and cultural climate."—The Boston Globe

"Junger argues with candor and grace for the everlasting remedies of community and connectedness."—O Magazine

"TRIBE is a fascinating, eloquent and thought-provoking book..packed with ideas...It could help us to think more deeply about how to help men and women battered by war to find a new purpose in peace."—The Times of London

"This is a brilliant little book driven by a powerful idea and series of reflections by the bestselling author of the bestselling books The Perfect Storm and War, and the film documentary Restrepo, about fighting in Afghanistan...The strongest experience of companionship and community often comes with the extremes of war. Junger is particularly good on the stress and exhilaration experienced by reporters, aid workers, and soldiers in combat - and the difficulties they face on return...I would give this gem of an essay to anyone embarking on the understanding of human society and governance."—Evening Standard

"An electrifying tapestry of history, anthropology, psychology and memoir that punctures the stereotype of the veteran as a war-damaged victim in need of salvation. Rather than asking how we can save our returning servicemen and women, Junger challenges us to take a hard look in the mirror and ask whether we can save ourselves."—The Guardian

"Junger has identified one of the last cohesive tribes in America and, through an examination of its culture of self-subjugation grasps for a remedy that might reunite a fragmented civilian society."—Elliot Ackerman, Times Literary Supplement

TRIBE is an extended reflection on the need for inclusion and belonging...written by an impassioned war correspondent less concerned with the scars of battle than the psychological dislocation experienced by those returning home, who have experienced tribal inclusion, but now face a future without it.—Pittsburgh Post-Gazette

TRIBE is a fascinating look into why inspires ancient human virtues of honor, courage and commitment on the battlefield, and the difficulty that can arise when a combat tour is over. While the book may easily fit in a soldier's small cargo pocket, it packs immensely valuable insight that is sure to bring understanding to military and civilian readers alike.—San Antonio Express-News

I first read about this history several months ago in Sebastian Junger's excellent book, TRIBE. It has haunted me since. It raises the possibility that our culture is built on some fundamental error about what makes people happy and fulfilled.—David Brooks, The New York Times