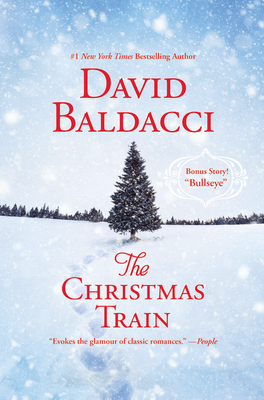 
Usually Ships in 1-5 Days
A journalist on a cross-country Christmas train scales the rugged terrain of his own heart in this New York Times bestselling holiday tale that inspired the Hallmark Hall of Fame original movie!

Disillusioned journalist Tom Langdon must get from Washington to Los Angeles in time for Christmas. Forced to travel by train, he begins a journey of rude awakenings, thrilling adventures, and holiday magic. He has no idea that the locomotives pulling him across America will actually take him into the rugged terrain of his own heart, as he rediscovers people's essential goodness and someone very special he believed he had lost.

David Baldacci's THE CHRISTMAS TRAIN is filled with memorable characters who have packed their bags with as much wisdom as mischief...and shows how we do get second chances to fulfill our deepest hopes and dreams, especially during this season of miracles.

DAVID BALDACCI is a global #1 bestselling author, and one of the world's favorite storytellers. His books are published in over forty-five languages and in more than eighty countries, with 150 million copies sold worldwide. His works have been adapted for both feature film and television. David Baldacci is also the cofounder, along with his wife, of the Wish You Well Foundation, a nonprofit organization dedicated to supporting literacy efforts across America. Still a resident of his native Virginia, he invites you to visit him at DavidBaldacci.com and his foundation at WishYouWellFoundation.org.

"Evokes the glamour of classic romances."—People

"Wonderful characters...all touched by the miracle of the Christmas season."—Houston Home Journal

"The makings of a classic...don't miss this delightful book."—Southern Pines Pilot

"An enjoyable journey...'All aboard!'"
—Orlando Sentinel