Diary of a Player: How My Musical Heroes Made a Guitar Man Out of Me (Paperback) 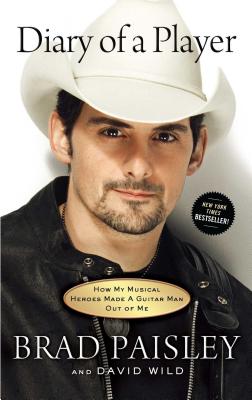 Diary of a Player: How My Musical Heroes Made a Guitar Man Out of Me (Paperback)


Usually Ships in 1-5 Days
(This book cannot be returned.)
Country music star Brad Paisley salutes others in the music world in this funny, personal, and fascinating portrait of what it’s like to be country’s leading guitar hero.

The Story of a Life with Strings Attached

Brad Paisley is one of country music’s leading men—admired as a recording artist, a performer, a songwriter, and a guitar slinger. This was not always so. In Diary of a Player, Paisley for the first time fully retraces his entire musical and personal journey to date. And it all began with a loving grandfather who gave eight-year-old Brad Douglas Paisley a Sears Danelectro guitar—the Christmas gift that would alter Brad’s life forever. In Brad’s own words, we read his emotional tribute to his late great “Papaw,” Warren Jarvis, who sparked his dream come true:

When I was eight I got a gift from my grandpa. No coincidence that around that time I also got an identity. See, no matter how I have changed, learned, and evolved as a person, the guitar has been a major part of it, and really the only constant. A crutch, a shrink, a friend, love interest, parachute, flying machine, soapbox, canvas, liability, investment, jackpot, tease, a sage, a gateway, an addiction, a recovery, a temptress, a church, a voice, veil, armor, and lifeline. My grandpa knew it could be many of these things for me, but mostly he just wanted me to never be alone. He said if I learned to play, anything would be manageable, and life would be richer. You can get through some real tough moments with that guitar on your knee. When life gets intense, there are people who drink, who seek counseling, eat, or watch TV, pray, cry, sleep, and so on. I play.
At age twelve, Brad Paisley wrote his first song, “Born on Christmas Day,” and today he boasts sixteen #1 hits. Brad’s latest album, American Saturday Night, was proclaimed by Newsweek as The Album of the Year. He has multiple Grammys, CMA, and ACM awards. Brad is married to actress Kimberly Williams Paisley and is the father of Huck and Jasper. He lives in Nashville, Tennessee.

As a graduate of Cornell University, David Wild is a contributing editor for Rolling Stone. He was nominated for an Emmy Award for his work on America: A Tribute to Heroes, a televised telethon held in the wake of 9/11.

"In his first book, Grammy Award-winning country star Paisley pays tribute to the legendary musicians who helped him along the way. Any guitar aficionado will love this tale of extraordinary musicians gladly guiding a talented youngster—a journey that began at the tender age of eight when Paisley's grandfather gave him his first guitar. With the collaboration of Wild, who is steeped in the country music scene, Paisley offers a story accessible even to country novices...Paisley certainly entertains in this charming story of his road to success."

"Brad Paisley knows a thing or two about writing hooks for general music fans while still throwing in enough guitar pyrotechnics to keep his guitar-playing audience happy, if not slightly stunned."

"Paisley and Wild write in an easygoing, personal style that suggests the experience of actually sitting down with the musician and hearing him describe his life in music and the lessons he's learned. Verdict: A must-read for any fan of Paisley, this book really tells readers what makes him tick. Highly recommended for all country fans."

"Country singer Brad Paisley is known as a man of many guitars, but none of these collectibles is as dear to him as the mail order Sears Danelectro Silvertone his grandfather bought him when he was eight. It is memories like this that make this autobiography such a vivid, personal document. By recalling the instruments that gave him a voice and a career, Paisley presents a far more intimate self-portrait than those rendered by fame-driven musicians. As he writes, 'There are some people who drink, who seek counseling, eat, or watch TV, cry, sleep, and so on. I play.' A memorable, amenable memoir."