Low Down and Dirty: A Novel (Paperback) 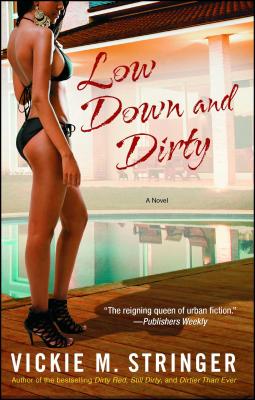 Low Down and Dirty: A Novel (Paperback)


Usually Ships in 1-5 Days
Dirty Red is back, and this time she’s on the run.

Having apparently wounded all of her enemies, and even her beloved Q, Raven “Red” Gomez finds herself away from Detroit living the life of luxury in Arizona. She’s become a successful home broker with a bestselling book, and it seems as if all of her dirty tricks have finally paid off—from framing Detective Thomas to ruining Kera's freedom. Unfortunately for Red, she’s made more enemies than she can count, and she soon finds herself running across country in fear of them all while still being in love with Q. Everyone seems to have a reason to pay her the ultimate revenge, and even the most unlikely become partners if it means finally bringing an end to all of Red’s dirty schemes.

In yet another fast-paced and spiraling edition in this bestselling series, Vickie Stringer writes about a woman who will do anything to save her life and the people who go so low in attempts to stop her.
Vickie M. Stringer is the author of Essence bestsellers, including Imagine This, Let that Be the Reason, Dirty Red, Still Dirty, and Dirtier Than Ever. She is the publisher of Triple Crown publications, one of the most successful African American book publishers in the U.S. and abroad. She has been featured in such prominent news media as The New York Times, Newsweek, MTV News, Publishers Weekly, Vibe, Millionaire Blueprints, Writer's Newsweek, Black Expressions, and many more. She lives in Columbus, Ohio, with her two children.

Vickie Stringer does it once again! Y'all gonna love this one!