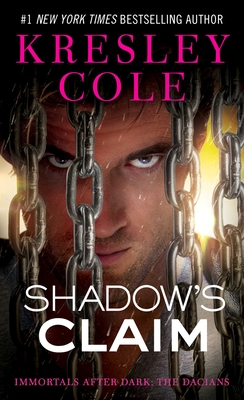 This is book number 13 in the Immortals After Dark series.

#1 New York Times bestseller Kresley Cole follows the royal bloodline of Dacia, a mysterious vampire kingdom within The Lore—Cole’s world of mythological creatures—in this next installment of her award-winning Immortals After Dark series.

Shadow’s Claim features Prince Trehan, a ruthless master assassin who will do anything to possess Bettina, his beautiful sorceress mate, even compete for her hand in a blood-sport tournament—to the death.

Trehan Daciano, known as the Prince of Shadows, has spent his life serving his people—striking in the night, quietly executing any threat to their realm. The coldly disciplined swordsman has never desired anything for himself—until he beholds Bettina, the sheltered ward of two of the Lore’s most fearsome villains.

Desperate to earn her guardians’ approval after a life-shattering mistake, young Bettina has no choice but to marry whichever suitor prevails—even though she’s lost her heart to another. Yet one lethal competitor, a mysterious cloaked swordsman, invades her dreams, tempting her with forbidden pleasure.

Even if Trehan can survive the punishing contests to claim her as his wife, the true battle for Bettina’s heart is yet to come. And unleashing a millennium’s worth of savage need will either frighten his Bride away—or stoke Bettina’s own desires to a fever pitch...
Kresley Cole is the #1 New York Times bestselling author of the Immortals After Dark paranormal series and the young adult Arcana Chronicles. Her books have been translated into over twenty foreign languages, garnered three RITA awards, and consistently appear on the bestseller lists in the US and abroad. Before becoming a writer, Cole was a world-ranked athlete, coach, and graduate student. She has traveled over much of the world and draws from those experiences to create her memorable characters and settings. She lives in Florida with her family and “far too many animals,” and spends any free time traveling. You can learn more about her and her work at KresleyCole.com or Facebook.com/KresleyCole.