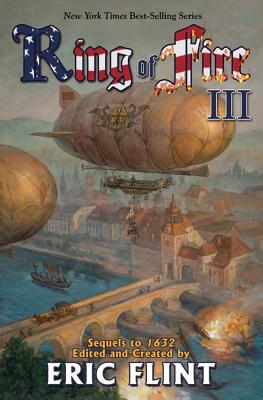 Collection #3 of rollicking and idea-packed alternate history tales written by today’s hottest science fiction writers and edited by New York Times best-seller Eric Flint. After a cosmic accident sets the modern-day West Virginia town of Grantville down in war-torn seventeenth century Europe, these everyday, resourceful Americans must adapt – or be trod into the dust of the past.

Let’s do the “Time Warp” again!  Another anthology of rollicking, thought-provoking collection of tales by a star-studded array of top writers such as bestseller Mercedes Lackey and Eric Flint himself – all set in Eric Flint’s phenomenal Ring of Fire series.

Rock on, Renaissance!  A cosmic accident sets the modern West Virginia town of Grantville down in war-torn seventeenth century Europe.  It will take all the gumption of the resourceful, freedom-loving up-timers to find a way to flourish in mad and bloody end of  medieval times.  Are they up for it?  You bet they are.  The third rollicking and idea-packed collection of Grantville tales edited by Eric Flint, and inspired by his now-legendary 1632.

“[Eric Flint] can entertain and edify in equal, and major, measure.” –Publishers Weekly
Eric Flint is a modern master of alternate history fiction, with 3 million books in print. He’s the author/creator of the multiple New York Times best-selling Ring of Fire series, starting with first novel 1632. With David Drake he has written six popular novels in the “Belisarius” alternate Roman history series, and with David Weber, he has collaborated on 1633 and 1634: The Baltic War, as well as four novels in Weber’s Honorverse series. Flint was for many years a labor union activist. He lives near Chicago, Illinois.