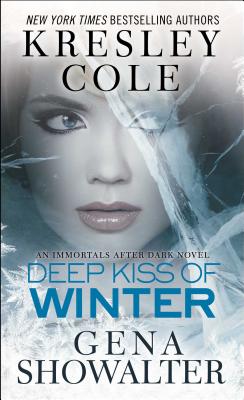 This is book number 8 in the Immortals After Dark series.

#1 NEW YORK TIMES BESTSELLING AUTHOR KRESLEY COLE delivers a breathtaking tale of a brutal vampire soldier about to know love for the first time . . . and a Valkyrie aching for his touch.

Murdoch Wroth will stop at nothing to claim Daniela—the delicate Valkyrie who makes his heart beat for the first time in three hundred years. Yet the exquisite Danii is part ice fey, and her freezing skin can’t be touched by anyone but her own kind without inflicting pain beyond measure. Can they conquer an agony of frustration and slake the overwhelming desire burning between them?

NEW YORK TIMES AND USA TODAY BESTSELLING AUTHOR GENA SHOWALTER puts a daring spin on a tale of huntress and hunted . . . and concocts a sensual chemistry that is positively explosive.

With only skin-to-skin contact, Aleaha Love can change her appearance, assume any identity. Now she’s an AIR (alien investigation and removal) agent on a mission to capture a group of otherworldly warriors. Only she is held captive when dangerously seductive Breean, a golden-skinned, iron-willed commander, threatens her new life—and for the first time, Aleaha wants only to be herself.
Kresley Cole is the #1 New York Times bestselling author of the Immortals After Dark paranormal series and the young adult Arcana Chronicles. Her books have been translated into over twenty foreign languages, garnered three RITA awards, and consistently appear on the bestseller lists in the US and abroad. Before becoming a writer, Cole was a world-ranked athlete, coach, and graduate student. She has traveled over much of the world and draws from those experiences to create her memorable characters and settings. She lives in Florida with her family and “far too many animals,” and spends any free time traveling. You can learn more about her and her work at KresleyCole.com or Facebook.com/KresleyCole.

Gena Showalter is the New York Times and USA TODAY bestselling author of more than fifty novels and multiple series, including the spellbinding Otherworld Assassins, Alien Huntress, and Lords of the Underworld series, her wildly popular young adult novels—Firstlife and Alice in Zombieland—and the highly addictive Original Heartbreakers series. Visit her at GenaShowalter.com.