Under the Red Velvet Cover: Conquering Victimhood and Breaking the Silence of Abuse, Corruption and Family Secrets - My Life Journey (Hardcover) 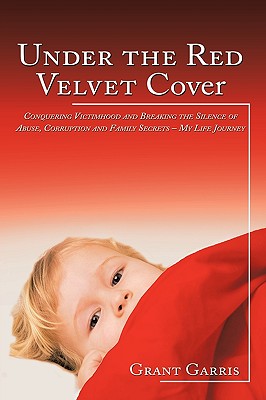 Under the Red Velvet Cover: Conquering Victimhood and Breaking the Silence of Abuse, Corruption and Family Secrets - My Life Journey (Hardcover)


Usually Ships in 1-5 Days
(This book cannot be returned.)
Today, I would learn the truth. An efficient sounding female voice answered the phone, "Dallas County Police Department." Where do I begin? What do I say? "Yes ma'am, I need to speak with someone about a case that's twenty two years old." "A case? What type of case?" "A sexual abuse case." With that phone call, successful business executive Grant Garris began a journey through the memory of his shattered childhood; many of the details as painstakingly clear as when they had occurred, as he suffered violent and horrific sexual abuse at the hands of his own grandfather. In a stark and startling memoir, Garris recounts his early years, offering no protection from the shocking reality that is childhood sexual abuse. Difficult to read and yet impossible to put down, Garris details molestation, the physical torture, and the sadistic mental manipulation that are the all-too-common arsenal of those who harm children - and those who protect them as they harbor a family's dirty secret. Standing against a monster and refusing to be deterred by the intricate family ties and powerful political connections of a Southern bastion family that threatened to sacrifice their own children to the altar of public image, Garris chose to prevail. Garris movingly recounts the surprising support system that evolved in his journey, including a seemingly powerless domestic servant, strangers, a fellow survivor named Oprah Winfrey, and a few courageous loved ones, all of whom dropped into his life at precisely the right moment. Garris' life story is not a narrative of victimhood, nor is it a rosy tale of happy endings tied up in a neat package. Instead, it is the gritty, raw, and sometimes wonderful reality of conquering adversity. This book should be required reading for all who believe it is time to shred the veil of secrecy that protects child molesters.