The Lord of Opium (The House of the Scorpion) (Paperback) 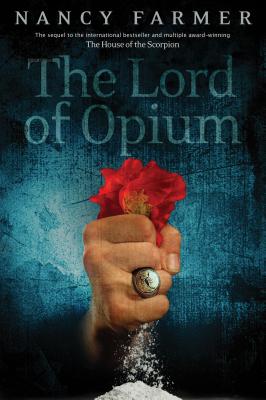 The Lord of Opium (The House of the Scorpion) (Paperback)


Email or call for price
As the teenage ruler of his own country, Matt must cope with clones and cartels in this “electric blend of horrors and beauty” (Publishers Weekly), the riveting sequel to the modern classic House of the Scorpion, winner of the National Book Award, a Newbery Honor, and a Printz Honor.

Matt has always been nothing but a clone—grown from a strip of old El Patron’s skin. Now, at age fourteen, he finds himself suddenly thrust into the position of ruling over his own country. The Land of Opium is the largest territory of the Dope Confederacy, which ranges on the map like an intestine from the ruins of San Diego to the ruins of Matamoros. But while Opium thrives, the rest of the world has been devastated by ecological disaster—and hidden in Opium is the cure.

And that isn’t all that awaits within the depths of Opium. Matt is haunted by the ubiquitous army of eejits, zombielike workers harnessed to the old El Patron’s sinister system of drug growing—people stripped of the very qualities that once made them human.

Matt wants to use his newfound power to help, to stop the suffering, but he can’t even find a way to smuggle his childhood love, Maria, across the border and into Opium. Instead, his every move hits a roadblock, some from the enemies that surround him…and some from a voice within himself. For who is Matt really, but the clone of an evil, murderous dictator? Is his true destiny already predetermined by his genes?
Nancy Farmer has written three Newbery Honor books: The Ear, the Eye and the Arm; A Girl Named Disaster; and The House of the Scorpion, which also won the National Book Award and the Printz Honor. Other books include The Lord of Opium, The Sea of Trolls, The Land of the Silver Apples, The Islands of the Blessed, Do You Know Me, The Warm Place, and three picture books for young children. She grew up on the Arizona-Mexico border and now lives with her family in the Chiricahua Mountains of Arizona.