The Pregnancy Project: A Memoir (Paperback) 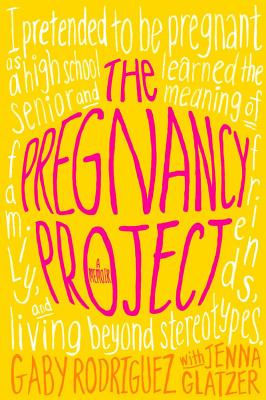 The Pregnancy Project: A Memoir (Paperback)

By Gaby Rodriguez, Jenna Glatzer (With)


Usually Ships in 1-5 Days
When high school senior Gaby faked a pregnancy as a project to challenge stereotypes, she also changed her life. Discover this compelling memoir from an inspirational teenage activist, now a Lifetime movie.

It started as a school project, but it turned into so much more.

Growing up, Gaby Rodriguez was often told she would end up a teen mom. After all, her mother and her older sisters had gotten pregnant as teenagers; from an outsider’s perspective, it was practically a family tradition. Gaby had ambitions that didn’t include teen motherhood. But she wondered: how would she be treated if she fulfilled others’ expectations? Would everyone ignore the years she put into being a good student and see her as just another pregnant teen statistic with no future? These questions sparked Gaby’s high school senior project: faking her own pregnancy to see how her family, friends, and community would react. What she learned changed her life forever…and made international headlines in the process.

In The Pregnancy Project, Gaby details how she was able to fake her own pregnancy, hiding the truth from even her siblings and boyfriend’s parents, and reveals all that she learned from the experience. But more than that, Gaby’s story is about fighting stereotypes, and how one girl found the strength to come out from the shadow of low expectations to forge a bright future for herself.
Gaby Rodriguez made national headlines in 2011 when, as a seventeen-year-old high school senior from Toppenish, Washington, she revealed she had faked a pregnancy for a class project. Her experience inspired a Lifetime movie, also titled The Pregnancy Project. Her grades were in the top 5% of her graduating class, and she was a commencement speaker. She was also in the ASB Leadership group and president of the school’s chapter of MEChA (Movimiento Estudiantil de Chicanos de Aztlan: Chicano Student Movement of Aztlan). She was raised by her single mom and has seven brothers and sisters.

Jenna Glatzer is the author, ghostwriter, and coauthor of more than thirty books, including Céline Dion’s authorized biography, a Marilyn Monroe biography authorized by her estate, several children’s picture books, memoirs, business and leadership books, books for writers, and other adult nonfiction books on topics ranging from fertility to bullying. Her books have been featured on The Oprah Winfrey Show, the Today show, Good Morning America, Dr. Phil, Access Hollywood, The View, Entertainment Tonight, Inside Edition, and in People, Time, and many others.

“…Gaby’s story is vividly told with a strong voice and a great story arc that begins with her parents and ends with a call to other teens and adults to stop the cycle of teen pregnancy, motherhood and poverty. THE PREGNANCY PROJECT is not just a good read, but an important one as well.” – BookReporter.com