Code of Conduct: A Thriller (The Scot Harvath Series #14) (CD-Audio) 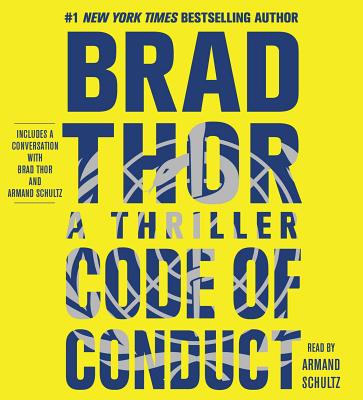 Code of Conduct: A Thriller (The Scot Harvath Series #14) (CD-Audio)

This is book number 14 in the The Scot Harvath Series series.

“Thor tops himself again and again.” —Bookreporter
“Feels like the TV show 24 on the page.” —Associated Press

Hidden deep within one of the world’s most powerful organizations is a secret committee with a devastating agenda. Its members are afforded incredible protections—considered elites, untouchables.

But when four seconds of video is captured halfway around the world and anonymously transmitted to DC, covert wheels are set in motion, and counterterrorism operative Scot Harvath is tapped to undertake the deadliest assignment of his career.

What begins as a favor will evolve into a globe-spanning drama of highly personal stakes played out against a backdrop of stunning international intrigue, duplicitous political gamesmanship, and the darkest, most clandestine fears of the espionage world.

With razor-sharp plotting, richly rendered characters, and heart-stopping surprises on every page, Thor isn’t just at the top of his game—he owns the entire genre.
Brad Thor is the #1 New York Times bestselling author of twenty-two thrillers, including Black Ice, Near Dark (one of Suspense Magazine’s Best Books of the Year), Backlash (nominated for the Barry Award for Best Thriller of the Year), Spymaster (“One of the all-time best thriller novels” —The Washington Times), The Last Patriot (nominated Best Thriller of the Year by the International Thriller Writers association), and Blowback (one of the “Top 100 Killer Thrillers of All Time” —NPR). Visit his website at BradThor.com and follow him on Facebook at Facebook.com/BradThorOfficial and on Twitter @BradThor.