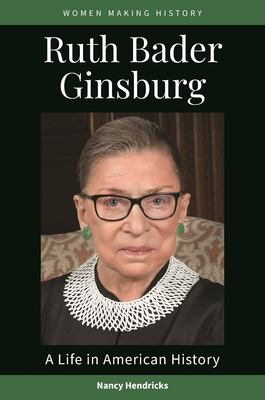 Ruth Bader Ginsburg: A Life in American History explores Ginsburg's path to holding the highest position in the judicial branch of U.S. government as a Supreme Court justice for almost three decades. Readers will learn about the choices, challenges, and triumphs that this remarkable American has lived through, and about the values that shape the United States.

Ginsburg, sometimes referred to as The Notorious RBG or RBG was a professor of law, a member of the American Civil Liberties Union, an advocate for women's rights, and more, before her tenure as Supreme Court justice. She has weighed in on decisions, such as Bush v. Gore (2000); King v. Burwell (2015); and Masterpiece Cakeshop v. Colorado Civil Rights Commission (2018), that continue to guide lawmaking and politics. Ginsburg's crossover to stardom was unprecedented, though perhaps not surprising. Where some Americans see the Supreme Court as a decrepit institution, others see Ginsburg as an embodiment of the timeless principles on which America was founded.

Nancy Hendricks, PhD, holds a doctorate in education and is an award-winning author.